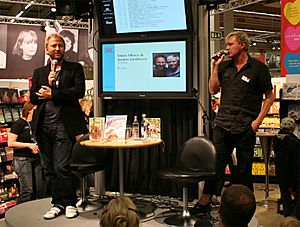 Sören Olsson (left) and Anders Jacobsson (right) during the Gothenburg Book Fair of 2007.

Anders Jacobsson,'born 1963 and Sören Olsson, born 1964 are two Swedish cousins who are writers of children's literature and young literature. They are mostly known for works like the Sune and Bert books, but also but also Tuva-Lisa. They have also written scripts for several TV series.

All content from Kiddle encyclopedia articles (including the article images and facts) can be freely used under Attribution-ShareAlike license, unless stated otherwise. Cite this article:
Anders Jacobsson and Sören Olsson Facts for Kids. Kiddle Encyclopedia.