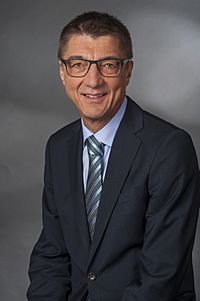 Andreas Schockenhoff (February 23, 1957 – 13 December 2014) was a German politician of the CDU. From 1990 until his death in 2014, he served as a member of the German Bundestag. In the general election in 2013, he was elected the seventh consecutive year as a direct mandate for the federal electoral district Ravensburg in the German Bundestag. Schockenhoff was born in Ludwigsburg, Germany.

All content from Kiddle encyclopedia articles (including the article images and facts) can be freely used under Attribution-ShareAlike license, unless stated otherwise. Cite this article:
Andreas Schockenhoff Facts for Kids. Kiddle Encyclopedia.