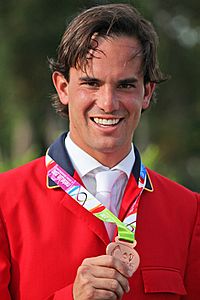 Andres Rodríguez (11 May 1984 – 4 January 2016) was a Venezuelan businessman and an international show jumping competitor. He was born in Caracas, Venezuela.

Rodríguez was killed in a car crash near Wellington, Florida, aged 31.

All content from Kiddle encyclopedia articles (including the article images and facts) can be freely used under Attribution-ShareAlike license, unless stated otherwise. Cite this article:
Andres Rodríguez Facts for Kids. Kiddle Encyclopedia.