Andrew J. Russell was born March 20, 1829, in Walpole, New Hampshire, the son of Harriet (née Robinson) and Joseph Russell. He was raised in Nunda, New York. He took an early interest in painting and executed portraits and landscapes for family members and for local public figures. 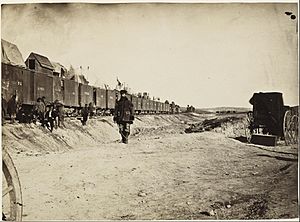 General John S. Casement and His Outfit (1867-8; during construction of the UP Railroad)

During the first two years of the Civil War, Russell painted a diorama used to recruit soldiers for the Union Army. On August 22, 1862, he volunteered at Elmira, New York, mustering in the following month as Captain in Company F, 141st New York Volunteer Regiment. In February 1863, Russell took an interest in photography and paid civilian photographer Egbert Guy Fowx $300 to teach him the collodion wet-plate process. Fowx was a free-lance photographer who worked both for noted photographer Mathew Brady and for the War Department.

Russell took his first photographs with a camera that he borrowed from Fowx and Colonel Herman Haupt. Haupt used Russell's photographs to illustrate his reports. Haupt arranged to have Russell removed from his regiment on March 1, 1863, so that he could photograph for the United States Military Railroad and the Quartermaster Corps, until he mustered out in September 1865. Russell was the only military officer to photograph for the War Department during the Civil War. He is perhaps best known for "Confederate dead Behind the Stone Wall" and another photograph stated before taken during the Battle of Chancellorsville on May 3, 1863. 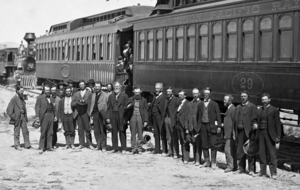 Russell photograph of the "Engineers of U.P.R.R. at the Laying of Last Rail Promentory" 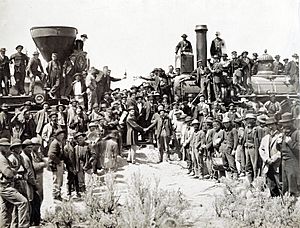 The ceremony for the driving of the golden spike at Promontory Summit, Utah, on May 10, 1869.

Russell photographed the construction of the UP Railroad in Wyoming and Utah Territories during 1868. During the winter he published The Great West Illustrated, an album of 50 photographs. In 1869 he returned to Utah Territory to photograph the completion of the First Transcontinental Railroad, or "golden spike" on May 10, 1869, at Promontory Summit, Utah Territory. for this work, Russell used his single-view camera. Russell took five group portraits that day, at least two were "...sent to New York as news pictures and arrived in time to be copied by engravers for the front page of the June 5 issue of Leslie's Illustrated Newspaper." These photographs and others have value today "... principally as sources for the identification of persons." One photograph shows a rank of sixteen men under the title "Engineers of U.P.R.R. at the Laying of Last Rail Promentory (sic)."

This ceremony marked the end of Russell's tenure as the official photographer of the Union Pacific railroad, a position he had taken after filling the same post for the Union Army during the Civil War. By 1869 he had in fact

"...labored for nearly two years to produce over 200 full plate (10" x 13") images and over 500 stereo cards. In general, Russell's work partook in the company's general effort to heroicize its own undertaking — an early form of advertising."

Later that year he traveled to California to photograph locations on the Central Pacific Railroad and returned to New York City at the end of 1869.

In New York, Russell established a design studio and worked as a photojournalist for Frank Leslie's Illustrated Newspaper through the early 1890s.

On 17 October 1850, Russell married Catherine Adelia Duryee, daughter of Lanah (née Conklin) and William Reynex Duryee. They had two daughters, Cora Phillips and Harriet M. Russell. Russell's fragmented family life is evidenced by the fact that he does not appear with them on any census record, save in 1860. His wife and daughters made their home in Minnesota and Illinois. Russell lived on Logan Street in Brooklyn, New York, where he died, 22 September 1902.

All content from Kiddle encyclopedia articles (including the article images and facts) can be freely used under Attribution-ShareAlike license, unless stated otherwise. Cite this article:
Andrew J. Russell Facts for Kids. Kiddle Encyclopedia.