Kids Encyclopedia Facts
Not to be confused with Promontory Point, Utah.

Promontory is an area of high ground in Box Elder County, Utah, 32 mi (51 km) west of Brigham City and 66 mi (106 km) northwest of Salt Lake City. Rising to an elevation of 4,902 feet (1,494 m) above sea level, it lies to the north of the Promontory Mountains and the Great Salt Lake. It is notable as the location of Promontory Summit, where the First Transcontinental Railroad in the United States was officially completed on May 10, 1869.

By the summer of 1868, the Central Pacific had completed the first rail route through the Sierra Nevada mountains, and was now moving down towards the Interior Plains and the Union Pacific's line. More than 4,000 workers, of whom two thirds were Chinese, had lain more than 100 mi (160 km) of track at altitudes above 7,000 ft (2,100 m). In May 1869, the railheads of the Union Pacific and the Central Pacific railroads finally met at Promontory Summit, Utah Territory. A specially-chosen Chinese and Irish crew had taken only 12 hours to lay the final 10 miles (16 km)* of track in time for the ceremony.

Promontory Summit had been agreed upon as the point where the two railheads would officially meet, following meetings in Washington, D.C. in April 1869, where it was also agreed that a ceremony would be held to drive in the Last Spike to commemorate the occasion. However, the original date of May 8 had to be postponed for two days, because of bad weather and a labor dispute on the Union Pacific side.

On May 10, in anticipation of the ceremony, Union Pacific's No. 119 and Central Pacific's No. 60 (better known as the Jupiter) locomotives were drawn up face-to-face on Promontory Summit, separated only by the width of a single tie. It is unknown how many people attended the event; estimates run from as low as 500 to as many as 3,000 government and railroad officials, and track workers who were present to witness the event. The distinct lack of Chinese workers seen in the official portrait of the occasion is said by historians to be due to racism. One account claims that it was due to timing:

The more famous A.J. Russell photograph could not include the Chinese workers photographed earlier participating in the joining of the rails ceremony because at the moment the famous photo was being taken it was after the conclusion of the ceremony and the Chinese workers were away from the two locomotives to dine at J.H. Strobridge's boarding car, being honored and cheered by the CPRR (Central Pacific Railroad) management.

Fifty years later, three of the eight Chinese workers who brought up the last rail were guests of honor at the Promontory Summit's golden anniversary celebrations in Ogden, Utah, in May 1919. 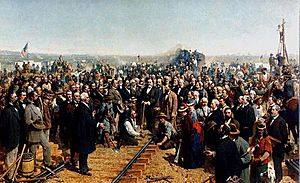 The event at Promontory Summit, which was billed as the "wedding of the rails", was officiated by the Reverend John Todd. Three spikes were driven: one (and probably the most famous) was the gold spike, one was silver, and one was a mix of gold, silver, and iron. In 1898, the golden spike was donated to the Stanford Museum (now Cantor Arts Center). The last laurel tie was destroyed in fires caused by the 1906 San Francisco earthquake. Stanford University loaned the original 1869 gold spike to Cecil B. DeMille for the film Union Pacific (1939). It was held aloft in the scene commemorating the actual event (a brass prop was used for the hammering sequence).

Despite Promontory Summit's historically marking the site where the First Transcontinental Railroad was officially completed, a direct coast-to-coast rail journey on this route was not achieved until 1873. On the West Coast, the Mossdale Bridge, which spanned the San Joaquin River near Lathrop, California, was completed in September 1869, connecting Sacramento to the network. To the East, passengers had to cross the Missouri River, between Council Bluffs, Iowa and Omaha, Nebraska, by boat until the Union Pacific Missouri River Bridge was built in 1873. In the meantime, the first uninterrupted coast-to-coast railroad was completed in August 1870 at Strasburg, Colorado, with the completion of the Denver extension of the Kansas Pacific Railway. 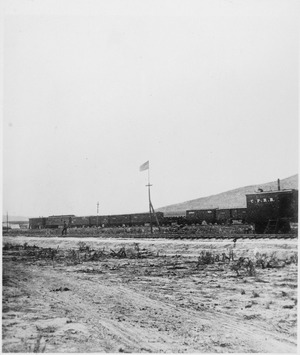 Promontory Summit in the 1870s.

Promontory was the site of Promontory City during and shortly after the construction of the transcontinental railroad. However, by December 1869, the shops, tents, and store fronts were being dismantled as the traders and merchants moved to other towns. In January 1870, the train crews from the CP and UP had been relocated to Ogden, Utah, where Union Station had effectively become the meeting point of the two railroads. Promontory Station had a CP station agent and telegraph operator, a Chinese section gang, and gravel train crew. By June 1870, the population at Promontory Summit had been reduced to about 40 people. Most were employees of the CP railroad. The only exceptions were a hotel/eatery owner, his family, and a miner.

The CP carried out extensive redevelopment of the rail infrastructure on Promontory Summit. The track was realigned, a roundhouse and turntable were built, and a freight depot and locomotive yard were added. It also gained extensive support facilities for workers, including a railroad eating stop, engine helper station, and quarters for the Chinese section crew.

In the final decades of the 19th century, Promontory Station was used by large ranching firms, such as John W. Kerr, John L. Edwards, and Charles Crocker's, to ship their cattle to the stockyards in San Francisco and Chicago. At the turn of the 20th century, wheat farmers had begun to change the landscape around Promontory with farms and families. Promontory had a one-room school as well as a commercial store/post office; it had become the main crossroads stop for small farms. However, during the droughts of the 1930s, individual arable farmers moved away from Promontory, leading to the consolidation of the land holdings. 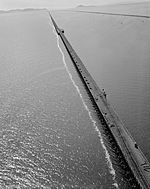 Aerial view of the trestle over the northern part of the Great Salt Lake west of Ogden in Box Elder County, Utah in August 1972. The replacement causeway is to the right.

The railroad across Promontory Summit remained in continuous use for 35 years. However, despite its historic importance, it was part of a large detour undertaken by the Union Pacific and the Central Pacific railroads because of the Great Salt Lake. As trains became longer and heavier, additional engines were often required to pull them up to the summit. Although Union Pacific engineers had initially considered a direct route across the lake, they opted for the surveyed line through Promontory due to cost and schedule reasons.

This changed when the Southern Pacific (which had acquired Central Pacific operations in 1885) built a wooden railroad trestle across the Great Salt Lake between Ogden and Lucin, between February 1902 and March 1904. The 102.9 mi (165.6 km) Lucin Cutoff completely bypassed Promontory Summit. The last regularly scheduled transcontinental passenger train to pass through Promontory station was on Sunday, September 18, 1904. When the Great Depression led to a dramatic fall in revenues from railroad traffic, the SP decided to abandon the line when it failed to meet its operating costs. On September 8, 1942, an "unspiking" ceremony was held to commemorate the lifting of the last rail over Promontory Summit; the old steel rails were used for the war effort in World War II.

By crossing the lake, the cutoff avoided the curvatures and grades over Promontory Summit.

In the 1950s, the wooden trestle bridge was replaced with a parallel concrete-stone causeway built by the Morrison Knudsen construction company. Southern Pacific continued to maintain the wooden trestle as a back-up for several decades, although its last significant rail traffic was in the early 1960s.

By the 1980s, the trestle's condition had begun to seriously deteriorate. Beginning in March 1993, the timber from the trestle has been salvaged and removed.

The Golden Spike National Historic Site, with replicas of the Central Pacific's Jupiter (left) and the Union Pacific's No. 119 facing each other during a re-enactment of the Golden Spike ceremony.

By the early 1950s, a number of re-enactments of the driving of the last spike had been held at Promontory Summit. The renewed interest led to a concerted effort to save the historic site. In 1957, local campaigners succeeded in getting the area recognized by the Federal government but without Federal land ownership. The Southern Pacific, which still owned the right of way, agreed to give its holdings to Federal management. On July 30, 1965 the Act for the Golden Spike National Historic Site was signed into law. The area is administered by the National Park Service.

On the 110th anniversary of the "Golden Spike" on May 10, 1979, two purpose-built replicas of the UP #119 and the Jupiter #60 were brought together on a specially relaid 1½ mile section of track. As the original Jupiter was scrapped for iron in 1901 and No. 119 was broken up two years later, the two replica locomotives were built in California with $1.5 million of federal funds. They were reconstructed using scaled-up measurements taken from photographs of the original engines.

The park, which has a visitor center and an engine house, is open throughout the year. Several walking trails and audio driving tours allow visitors to see the old cuts along the permanent way highlighting the effort needed to construct the railroad over Promontory Summit. On every Saturday and holiday between May 1 and Labor Day, the two replica locomotives are lined up to re-enact the "Golden Spike" ceremony.

All content from Kiddle encyclopedia articles (including the article images and facts) can be freely used under Attribution-ShareAlike license, unless stated otherwise. Cite this article:
Promontory, Utah Facts for Kids. Kiddle Encyclopedia.