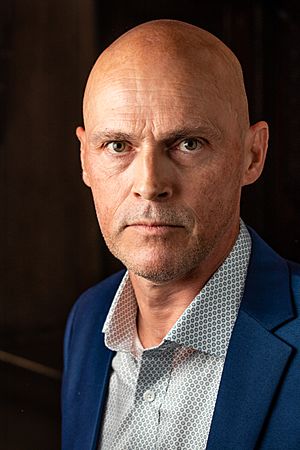 Andrew R. C. Marshall (born 1967) is a British journalist and author. He is Southeast Asia Special Correspondent for Reuters. He won the 2014 Pulitzer Prize for International Reporting, along with with Jason Szep. This was awarded to the pair for their report on the violent treatment of the Rohingya, a mainly Muslim ethnic group in Myanmar. He has also written for Time, The Sunday Times, National Geographic, Esquire and many others.

Marshall graduated from the University of Edinburgh in 1989. He lives in Bangkok, Thailand.

All content from Kiddle encyclopedia articles (including the article images and facts) can be freely used under Attribution-ShareAlike license, unless stated otherwise. Cite this article:
Andrew Marshall (Asia journalist) Facts for Kids. Kiddle Encyclopedia.