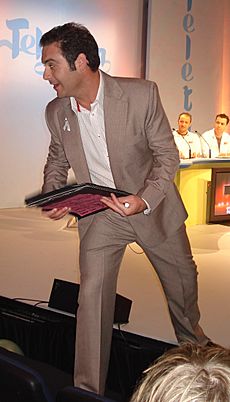 Andrew Patrick O'Keefe (born 1 October 1971) is an Australian television presenter and former lawyer. He works for the Seven Network. He is known as the host of game show Deal or No Deal (2003–2013). Since 2015, he has hosted The Chase, based on the British program of the same name. He was also the co-host of Weekend Sunrise alongside Monique Wright between 2006 and 2017.

O'Keefe was born in Sydney, New South Wales. He was married to Eleanor until their divorce in 2019. The couple have three children.

All content from Kiddle encyclopedia articles (including the article images and facts) can be freely used under Attribution-ShareAlike license, unless stated otherwise. Cite this article:
Andrew O'Keefe Facts for Kids. Kiddle Encyclopedia.