David James Koch ( KOSH; born 7 March 1956), nicknamed "Kochie" ( KOSH-ee), is an Australian television presenter who is best known as a host of the Seven Network's breakfast program, Sunrise. From Adelaide, he began his media career as a financial journalist, writing for a number of different publications before eventually moving to television. Koch has been the chairman of the Port Adelaide Football Club, an Australian Football League (AFL) club, since October 2012.

Koch was born on 7 March 1956 in Adelaide, South Australia. He trained as an accountant and started as a cadet on the business pages of The Australian newspaper before joining BRW magazine soon after its launch in the early 1980s. He was one of the founders of consumer finance journalism in Australia and created Personal Investment magazine, which made him the youngest editor in the Fairfax Media group. He then launched Personal Investment magazines in New Zealand and the UK. He produced Britain's first "rich list" which started in Money Magazine which he had bought for Fairfax.

He provides business and financial commentary for several publications, including Pacific Magazines, Yahoo Finance and the "Your Money" section of News Ltd newspapers.

Koch was a director of the NSW Small Business Development Corporation Ltd for eight years after its inception in 1996. As a former business owner and operator and now director of Pinstripe Media Pty Ltd, he speaks regularly at corporate events about small business, finance and investment issues.

Koch has presented over 100 episodes of a weekly small business program on the Seven Network, Business Builders, which helps private business owners improve their business. The program is produced by Koch's company Pinstripe Media.

In 2013, Koch launched KBB Digital, a digital marketing agency for small business which is an extension of the 'Kochie's Business Builders' brand.

In 2020, in partnership with Kylie Merritt, Koch launched ausbiz, an Australian business and finance streaming platform.

He was initially hired to replace Chris Reason who stepped down after a cancer diagnosis towards the end of 2002; however, his position later became permanent. He and his original co-host, Melissa Doyle, hosted the program over a period that saw viewer ratings grow until Sunrise became the leading breakfast television show in Australia.

Koch also co-hosted another Seven Network production, Where Are They Now?, also with then-Sunrise co-host Melissa Doyle. He also hosts a show for small businesses, Kochie's Business Builders, which airs on Sundays on the Seven Network. 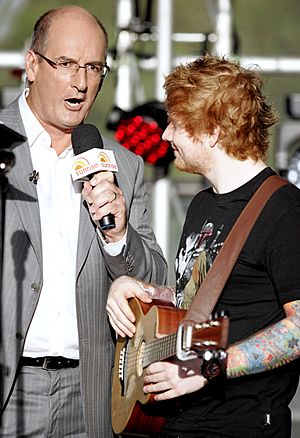 Koch was nominated for a silver Logie in 2004 and 2005 for Best TV Presenter.

Koch has written several practical books on family and business financial management; he has also published a book of jokes compiled from his daily joke segment on TV. The book was parodied in an episode of The Chaser's War on Everything where reading jokes from "Kochie" was the only thing that got a laugh at a stand-up comedy club. In a survey conducted by Money Management newspaper, his peers recognised him as one of the 10 most influential people of all time in the financial services industry. There may be a conflict of interest in this recognition he received from Money Management newspaper given he set up the publication via his trade publishing group Australian Financial Press (see above).

Koch was frequently parodied on the television show Comedy Inc., in which he was played by Paul McCarthy. Reader's Digest listed him in the top 50 Most Trusted Australians.

In 2007, readers of Banking and Finance Magazine voted Koch Australia's Best Finance Journalist while the Council of Small Business Organisations of Australia presented him with the "Small Business Champion award" in recognition of his support of Australian small business.

He appeared on Australian soap opera Home and Away in 2007 and appeared on All Saints in 2004 as an Elvis impersonator.

Koch was the number one ticket-holder of Australian Football League team Port Adelaide Football Club from 2007, jointly with Australian model and actress Teresa Palmer in 2009 and is a shareholder in the Sydney Kings basketball team.

Through a Sunrise campaign and his involvement in ShareLife, Koch influenced the federal government to establish a national authority (the Organ & Tissue Authority) to oversee Australia's organ transplant system. Previously Australia had the highest level of registered organ donors per head of population in the world but one of the lowest transplant rates. The new national authority aims to bring Australian transplant rates up to world's best practice. Koch was Chairman of the 'Organ and Tissue Authority Advisory Council' but resigned on-air, during a Sunrise broadcast on 27 May 2015, in protest over a government review of organ donation. Assistant Health Minister Fiona Nash had failed to advise him about the review.

Koch also played the voice of the "Australian Newsreader" in the 2009 DreamWorks film, Monsters vs. Aliens.

He has climbed Mt Kilimanjaro twice to raise money for charity and walked the Kokoda Track.

On 2 October 2012, Koch was announced as the chairman of the Port Adelaide Football Club a position he started at the beginning of 2013, succeeding Brett Duncanson.

All content from Kiddle encyclopedia articles (including the article images and facts) can be freely used under Attribution-ShareAlike license, unless stated otherwise. Cite this article:
David Koch (television presenter) Facts for Kids. Kiddle Encyclopedia.