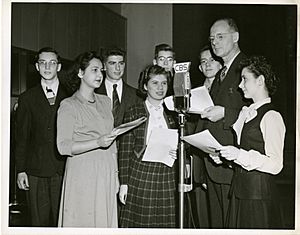 Andrew Marienhoff Sessler (December 11, 1928 – April 18, 2014) was an American physicist, academic (University of California, Berkeley) and humanitarian. He was the President of the American Physical Society during 1998. He won the Enrico Fermi Award in 2013. He was born in New York City, New York.

All content from Kiddle encyclopedia articles (including the article images and facts) can be freely used under Attribution-ShareAlike license, unless stated otherwise. Cite this article:
Andrew Sessler Facts for Kids. Kiddle Encyclopedia.