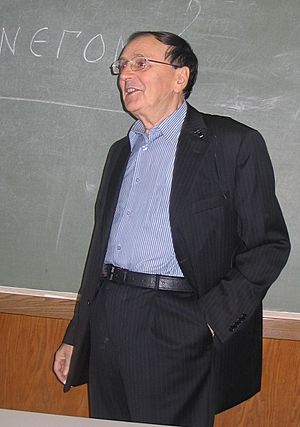 Andrey Anatolyevich Zaliznyak (29 April 1935 – 24 December 2017) was a Russian linguist, an expert in historical linguistics and grammar. He was born in Moscow. He was known for his attention to the popularizing of linguistics and to the struggle against pseudoscience. In 2004, he published a study of the Tale of Igor's Campaign.

All content from Kiddle encyclopedia articles (including the article images and facts) can be freely used under Attribution-ShareAlike license, unless stated otherwise. Cite this article:
Andrey Zaliznyak Facts for Kids. Kiddle Encyclopedia.