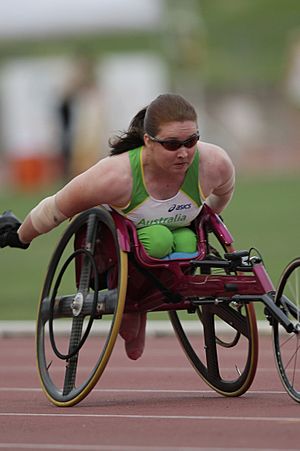 Angie Ballard is an athlete with a disability from Australia. She competes in a wheelchair.

Ballard was born on 6 June 1982. in Canberra, Australian Capital Territory. She has two cats, Monkee and Jaguar, and a dog named Angel.

All content from Kiddle encyclopedia articles (including the article images and facts) can be freely used under Attribution-ShareAlike license, unless stated otherwise. Cite this article:
Angie Ballard Facts for Kids. Kiddle Encyclopedia.