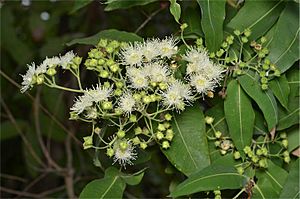 Angophora subvelutina, commonly known as the broad-leaved apple, is a species of tree that is endemic to eastern Australia. It has rough bark on the trunk and branches, lance-shaped to egg-shaped or elliptical adult leaves, flower buds in groups of three or seven, white or creamy white flowers and ribbed, cup-shaped fruit.

Angophora subvelutina was first formally described in 1858 by Ferdinand von Mueller in his book Fragmenta phytographiae Australiae. The specific epithet subvelutina is from Latin, and it translates to "almost velvety".

Broad-leaved apple grows in open forest in alluvial soil and gravelly clay. It is found mainly in near-coastal areas from near Bundaberg in Queensland and south to near Taree and disjunctly to near Araluen in New South Wales.

The 1889 book 'The Useful Native Plants of Australia’ records that "The Rev. Dr. Wolls states that these "apple trees" are sometimes cut down to keep cattle alive in dry seasons, as the leaves are relished by them."

All content from Kiddle encyclopedia articles (including the article images and facts) can be freely used under Attribution-ShareAlike license, unless stated otherwise. Cite this article:
Angophora subvelutina Facts for Kids. Kiddle Encyclopedia.