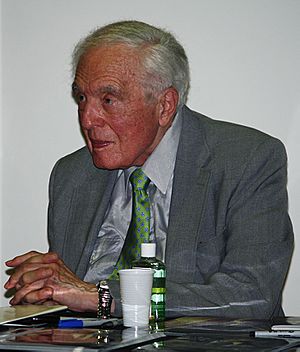 Lawrence Rory Guy (August 19, 1926 – January 9, 2016), better known as Angus Scrimm, was an American actor and writer. He best known for playing the Tall Man in the horror movie Phantasm (1979) and its sequels, Phantasm II (1988), Phantasm III: Lord of the Dead (1994), Phantasm IV: Oblivion (1998), and his final movie Phantasm: Ravager (2016). He also appeared in the television series Alias. He wrote liner notes for musician such as Frank Sinatra to The Beatles. He won a Grammy Award for his liner notes.

Scrimm was born in Kansas City, Kansas. He studied at the University of Southern California in Los Angeles, California.

All content from Kiddle encyclopedia articles (including the article images and facts) can be freely used under Attribution-ShareAlike license, unless stated otherwise. Cite this article:
Angus Scrimm Facts for Kids. Kiddle Encyclopedia.