Anigozanthos is a small genus of Australian plants in the bloodwort family Haemodoraceae. The 11 species and several subspecies are commonly known as kangaroo paw and catspaw depending on the shape of their flowers. A further species, previously identified as Anigozanthos fuliginosus and commonly known as the black kangaroo paw, has been transferred to its own monotypic genus and is now known as Macropidia fuliginosa.

The genus was first named by Jacques Labillardière in his work, Relation du Voyage à la Recherche de la Pérouse, issued in 1800. The French botanist collected and described the type species, Anigozanthos rufus, during the d'Entrecasteaux expedition's visit to Southwest Australia in 1792. In recent years numerous hybrids and cultivars have been developed. Kangaroo paws are much in demand as house plants and as cut flowers.

The red-and-green kangaroo paw is the floral emblem of Western Australia. 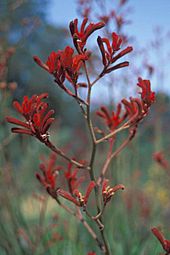 These perennials are endemic to dry sandy, siliceous areas of southwest Australia, but they occur as well in a variety of other environments and soil types. They are grown commercially in Australia, the United States, Japan and Israel.

The plant grows from short, underground, horizontal rhizomes. The length and the character of these may vary between the species: some are fleshy, others are fragile. The sap in the root system allows the plants to survive extreme dry spells. In summer, a number of species die back to the rhizome, growing back in autumn.

The plants have a basal rosette of long green to greyish-green leaves. The leaves of some species are hairy. From the heart of this roset merge long leafless stalks, which can reach 2 m, ending in a raceme of flowers. The size and height of these stalks, which can be clothed in coloured hairs, varies between the species.

The tuberous flower buds are also covered with coloured hairs, giving it a velvety aspect. These long furry hairs also determine the colour of the flower, which may range from almost black to yellow, orange and red. Some species are even dichromatic (as Anigozanthos manglesii). The tubular form of the flower bud resembles a kangaroo paw, hence its name. The flower tip spreads fanlike into six petals. Full-grown plants can have up to ten flowers at the end of each stalk.

The genus comprises 11 species, some species with subspecies recognised by FloraBase as rare or endangered taxa.

The popularity of Anigozanthos, as a garden plant or commercially produced cut-flower, has led to the development of cultivars. The Australian Cultivar Registration Authority lists twenty seven registered names and descriptions of cultivars derived from the genus. A larger number of patents for these, accepted or granted 'varieties', are recorded in the Plant breeders' rights database.

All content from Kiddle encyclopedia articles (including the article images and facts) can be freely used under Attribution-ShareAlike license, unless stated otherwise. Cite this article:
Anigozanthos Facts for Kids. Kiddle Encyclopedia.