Anigozanthos manglesii, commonly known as the red-and-green kangaroo paw, Mangles kangaroo paw, Kurulbrang (Noongar), is a plant species endemic to Western Australia, and the floral emblem of that state.

The flower has become symbolic of the region. The display between August and November is remarkable for the high standing flowers occurring in urban and coastal regions. The species is not threatened, but is protected under state legislation. A license is required for collection from the wild. It is desirable as a cut flower, possessing an unusual form and striking colours that last well.

A member of the Anigozanthos genus, Anigozanthos manglesii is a rhizotomous perennial with long, grey-green linear leaves around 30 to 60 cm long. The leaves extended from a central point at ground level. Its red and green flowers appear at the end of long stalks between August and November. The flowers display in a sequence from the lowest point, those following are in a progression of development. The spent flower-stalks may remain well after their season. The length of these stalks from the base is up to 1200 mm tall. 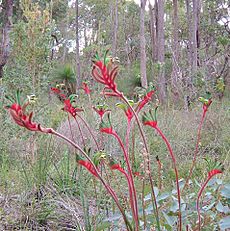 Anigozanthos manglesii in bushland on the Darling Scarp. 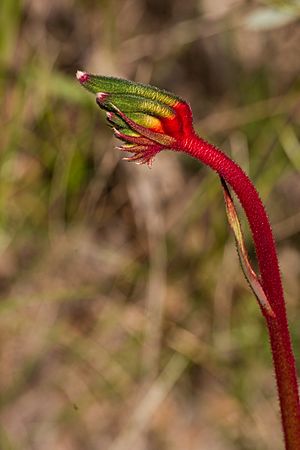 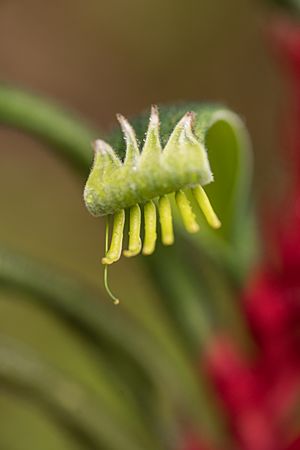 The species is widely distributed throughout the Southwest Australian biogeographic regions, preferring white, yellow or grey sand, or sandy loam. The occurrence is confirmed in the northernmost part of its range in the Geraldton Sandplains and the Swan Coastal Plain near Perth. Extensive records also exist of occurrence in Jarrah Forest and Warren region to the south, but not reaching the southern coasts. It extends inland to the Avon Wheatbelt.

The species was first described by a Scottish botanist David Don in 1834 from the type specimen:

This singularly beautiful species of Anigozanthos was raised in the garden at Whitmore Lodge, Berks., the seat of Robert Mangles, Esq. from seeds brought from Swan River by Sir James Stirling, the enterprising governor of that colony, by whom they had been presented to Mr. Mangles.

There are two recognised subspecies as follows:

Wide occurrence as far north as Gingin and to Cape Leeuwin in the south.

Anigozanthos manglesii is often artificially hybridized with A. flavidus and to a lesser extent A. rufus. Cultivars include:

In temperate regions this plant is either grown under glass or outdoors with the winter protection of a mulch. The species germinates readily from seed. As plants generally deteriorate after the second season, they are best treated as biennial. Watering should be withheld during the dormant period. They are susceptible to fungal ink spot disease and the leaves are attractive to snails. They are often used as cut flowers, due to their unique appearance and lasting qualities.

All content from Kiddle encyclopedia articles (including the article images and facts) can be freely used under Attribution-ShareAlike license, unless stated otherwise. Cite this article:
Anigozanthos manglesii Facts for Kids. Kiddle Encyclopedia.