Macropidia fuliginosa, the sole species of genus Macropidia, is a perennial rhizomatous flowering plant. Commonly known as the black kangaroo paw, it is endemic to Southwest Australia, specifically from Perth to Geraldton in the north of the region.

A small perennial herb with erect green-yellow leaves, occurring with a height between 0.2 and 1.8 metres in height. The leaves are strap-like, between 200 and 500 mm long, and tightly clustered around ground level. They emerge from a stem beneath the ground, a rhizome, that allows the plants to regenerate after fire. Flowers occur in spring and summer on branched stem to a metre or more. Black hairs occur along the flowers and stems.

It is known to be pollinated by the following birds:

It can be germinated from seed for cultivation, but commercial production use tissue cultures as a means of propagation. This species is not as widely seen as the kangaroos paws of Anigozanthus , whose species are hardier and more successfully cultivated.

It is classified as 'not threatened', within the Western Australian Flora Conservation Taxa.

The name kangaroo paw is given for the flowering branches resemblance to a kangaroos forearm. The 'black' species is contained by a monotypic genus, eleven other similar plants of this name are contained by the genus Anigozanthus. The generic name Macropidia refers to the kangaroo genus Macropus; fuliginosa is from the Latin for soot (fuligo) referring to the black colouration. The description of the species in the Botanical Magazine in 1847, then known only from dried specimens, gave the common name sooty anigozanthos.

"Nollamara" is the Aboriginal word for the black kangaroo paw and the name was given to a suburb of Perth. 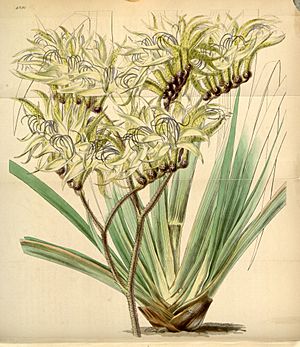 When affected by disease it can be burned back to the ground and will regrow from the rhizome. Like many Australian natives it can withstand bushfire in the wild. It is subject to fungal diseases such as the ink-spot fungus, and the rust fungus Puccinia haemodora.

All content from Kiddle encyclopedia articles (including the article images and facts) can be freely used under Attribution-ShareAlike license, unless stated otherwise. Cite this article:
Macropidia Facts for Kids. Kiddle Encyclopedia.