Therese Ann Rutherford (November 2, 1917 – June 11, 2012), known as Ann Rutherford, was a Canadian-American actress in television, radio and film. She playied Polly Benedict during the 1930s and 1940s in the Andy Hardy series. She played Scarlett O'Hara's sister in the movie Gone With the Wind (1939). 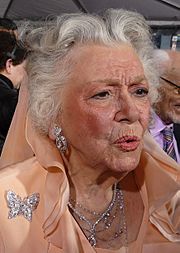 All content from Kiddle encyclopedia articles (including the article images and facts) can be freely used under Attribution-ShareAlike license, unless stated otherwise. Cite this article:
Ann Rutherford Facts for Kids. Kiddle Encyclopedia.