A "woman of letters" who published in multiple genres, Barbauld had a successful writing career at a time when women rarely wrote professionally. She was a noted teacher at the Palgrave Academy and an innovative writer of works for children; her primers provided a model for more than a century. Her essays showed it was possible for a woman to be publicly engaged in politics; other women authors such as Elizabeth Benger emulated her. Barbauld's literary career spanned numerous periods in British literary history: her work promoted the values of the Enlightenment and of sensibility, while her poetry made a founding contribution to the development of British Romanticism. Barbauld was also a literary critic. Her anthology of 18th-century novels helped to establish the canon as it is known today.

Barbauld's career as a poet ended abruptly in 1812, with the publication of Eighteen Hundred and Eleven, which criticised Britain's participation in the Napoleonic Wars. She was shocked by the vicious reviews it received and published nothing else in her lifetime. Her reputation was further damaged when many of the Romantic poets she had inspired in the heyday of the French Revolution turned against her in their later, more conservative years. Barbauld was remembered only as a pedantic children's writer in the 19th century, and largely forgotten in the 20th, until the rise of feminist literary criticism in the 1980s renewed interest in her works and restored her place in literary history.

Much of what is known about Barbauld's life comes from two memoirs, the first published in 1825 and written by her niece, Lucy Aikin, and the second published in 1874, written by her great-niece Anna Letitia Le Breton. Some letters from Barbauld to others also exist. However, a great many Barbauld family documents were lost in a fire that resulted from the London blitz in 1940. 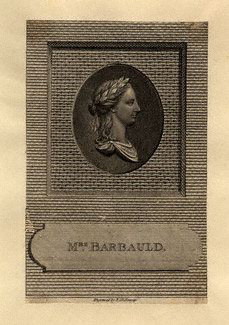 At her death, Barbauld was lauded in the Newcastle Magazine as "unquestionably the first [i.e., best] of our female poets, and one of the most eloquent and powerful of our prose writers" and the Imperial Magazine declared "so long as letters shall be cultivated in Britain, or wherever the English language shall be known, so long will the name of this lady be respected." She was favourably compared to both Joseph Addison and Samuel Johnson – no mean feat for a woman writer in the 18th century. By 1925, however, she was remembered only as a moralising writer for children, if that. It was not until the advent of feminist literary criticism in the academic world of the 1970s and 1980s that Barbauld finally began to be included in literary history.

Barbauld's remarkable disappearance from the literary landscape took place for a number of reasons. One of the most important was the disdain heaped upon her by Samuel Taylor Coleridge and William Wordsworth, poets who in their youthful, radical days had looked to her poetry for inspiration, but in their later, conservative years dismissed her work. Once these poets had become canonised, their opinions held sway. Moreover, the intellectual ferment of which Barbauld was an important part of – particularly at the Dissenting academies – had by the end of the 19th century come to be associated with the "philistine" middle class, as Matthew Arnold put it. The reformist 18th-century middle class was later held responsible for the excesses and abuses of the industrial age. Finally, the Victorians viewed Barbauld as "an icon of sentimental saintliness" and "erased her political courage, her tough mindedness, [and] her talent for humor and irony", to arrive at a literary figure that modernists despised.

As literary studies developed into a discipline at the end of the 19th century, the story of the origins of Romanticism in England emerged along with it. According to this version of literary history, Coleridge and Wordsworth were the dominant poets of the age. This view held sway for almost a century. Even with the advent of feminist criticism in the 1970s, Barbauld did not receive her due. As Margaret Ezell explains, feminist critics wanted to resurrect a particular kind of woman – one who was angry, who resisted the gender roles of her time, and who attempted to create a sisterhood with other women. Barbauld did not easily fit into these categories. Indeed, it was not until Romanticism and its canon began to be re-examined through a deep reassessment of feminism itself that a picture emerged of the vibrant voice that Barbauld had contributed.

Barbauld's works fell out of print and no full-length scholarly biography of her was written until William McCarthy's Anna Letitia Barbauld: Voice of the Enlightenment in 2009.

Barbauld's adopted son Charles grew up to be a doctor and chemist. He married a daughter of Gilbert Wakefield. Their child, Anna Letitia Le Breton, wrote literary memoirs, which included a Memoir of Mrs. Barbauld, including Letters and Notices of her Family and Friends in 1874.

All content from Kiddle encyclopedia articles (including the article images and facts) can be freely used under Attribution-ShareAlike license, unless stated otherwise. Cite this article:
Anna Laetitia Barbauld Facts for Kids. Kiddle Encyclopedia.