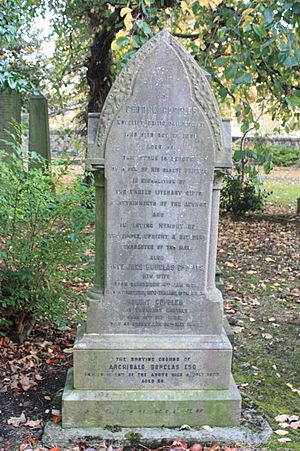 Anne Jane Cupples, née Douglas (4 January 1839 – 14 November 1896) was a Scottish writer and populariser of science. She was married to a famous maritime novelist George Cupples, and after his death moved to be with her sisters in New Zealand, where she died in 1896. She wrote around fifty books in total, mostly intended for children, under the name Mrs George Cupples.

Anne was born on 4 January 1839 at 34 Gilmore Place, Edinburgh, the second daughter and third of seven children of Archibald Douglas of Morton, and his wife, Caroline Montague Douglas, née Scott. On 18 May 1858, Anne, aged 19, married George Cupples, a respected literary figure and breeder of Scotch deerhounds, aged 36. In 1859, her father died at the age of 55, and her widowed mother continued as planned to New Zealand, where she established a small school at Pelichet Bay, near Dunedin. Anne Jane remained in Scotland, along with a brother, who later travelled to New Zealand.

Mrs Cupples' first book to be published appears to be Unexpected Pleasures or, Left Alone in the Holidays, published by W.P. Nimmo, Edinburgh in 1868. This book was published when Ann Jane was twenty-nine years old, ten years since the Cupples were married, and she may have realised that she was not going to have children. She may have been looking for a productive means of filling in her time by writing for other people's children.

1869 saw the publication of her full‑length novel for boys, Norrie Seton or, Driven to Sea, again published by W. P. Nimmo, Edinburgh. Nimmos brought out a new edition in 1896. This book appears to have been inspired by her husband's unhappy teenage years on a sailing ship on the trade route between Britain and India.

She is also the author of Bill Marlin's Tales of the Sea (1867) or (1860), Tappy's chicks and other links between nature and human nature (1872), The children's voyage, or a trip in the Water Fairey (1873), Fables: illustrated stories from real life (2 series, 1874-5) and about 45 other books. From 1869 onwards, twenty six of her books were published by T. Nelson & Sons of London, including Alice Leighton; or, A Good Name is rather to be chosen than riches, Carryś Rose or, The Magic of Kindness and Hugh Wellwoodś Success or, Where Thereś a Will Thereś a Way.

In a letter dated 28 Nov 1870, Anne Jane Cupples wrote to Charles Darwin to seek his help in securing a government pension for her husband. Darwin later corresponded with her about her observations of emotions in dogs, and urged the Royal Literary Fund to support her and her husband.

Cupples founded a school erected by public subscription, for the training of orphan girls and boys from Glasgow, situated on Duchray Water, Aberfoyle. She was also a member of the committee of the Edinburgh YWCA.

On 17 October 1891, George Cupples died aged 69, and three years later Mrs Cupples decided to join her sisters in New Zealand. She sailed from Plymouth in RMS Gothic for Port Chalmers, arriving there on 14 November 1894. She spent the next four years living with her unmarried sisters, Margaret and Caroline Douglas who lived at Mosgiel, near Dunedin. Anne Jane published George's life's findings on dogs in a lavish illustrated book of over three hundred pages called Scotch Deer hounds and their Masters.

George and Anne are buried together in Dalry Cemetery in south-west Edinburgh.

All content from Kiddle encyclopedia articles (including the article images and facts) can be freely used under Attribution-ShareAlike license, unless stated otherwise. Cite this article:
Anne Jane Cupples Facts for Kids. Kiddle Encyclopedia.