Dalry is an area of the Scottish capital city of Edinburgh. It is located close to the city centre, between Haymarket and Gorgie. The area is now primarily residential. It is centred around Dalry Road, which has numerous shops, restaurants and small businesses. Lying outside the old city walls and west of the castle, the area began as part of the agricultural estate of Dalry House (constructed in 1661), the exception being the Dalry Mill, recorded as the oldest paper mill in Scotland, now demolished. In the Victorian period industrial development followed along with large scale tenement construction, new road layouts and the addition of railway infrastructure, all of which came to occupy the former fields. By the early 21st century most of the industry of Dalry has disappeared, with the former sites converted to private housing.

The name Dalry may derive from Dail Rig or Dail Ruigh, Scottish Gaelic for the "Place of the Fields" or "King's Field" respectively. "Field of the heather" from Dail and Scottish Gaelic fhraoich, heather, has also been suggested as a derivation. 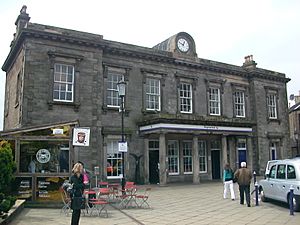 Dalry is centred on Dalry Road, which is the beginning of the A70 road. The area is often mentioned along with the neighbouring area of Gorgie to the southwest, and the joint name Gorgie-Dalry is commonly used by the City of Edinburgh Council. The border with Gorgie runs through the large site of the North British Distillery in one area, to the Tynecastle Stadium in the south-west.

The area of Fountainbridge, with the Union Canal marks the south-eastern boundary of Dalry. Fountainbridge is accessed via the Telfer Subway, a long underground passage which passes underneath the city's West Approach Road. The Telfer subway was built in the mid-19th century to provide access to the old Dalry Road Railway station from Dundee Street, but it remained as a primary pedestrian route following the replacement of the railway by the West Approach Road in the 1970s.

Dalry also borders the Edinburgh areas of Ardmillan to the south, Roseburn to the north-west and Haymarket to the north. Dalry has become an increasingly popular residential area in recent years, and has a range of shops, restaurants and leisure facilities. Princes Street, in central Edinburgh, is ten to fifteen minutes' walk from the area. Many of Edinburgh's major employers are also within walking distance. The nearest railway station is Haymarket railway station, which is located directly adjacent to the northern boundary of Dalry.

Dalry is first recorded around 1328, which together with Merchiston were owned by William Bisset. Dalry Mill was located on these lands and is stated to have existed in various forms from at least 1478 to sometime in the mid-18th century. The mill was actively engaged in paper production in 1590, the first paper mill recorded to exist in Scotland. The Edinburgh Paper mill produced 'white writing and printing papers' as a result of the growth in the nearby city centre printing, publishing and banking industries. 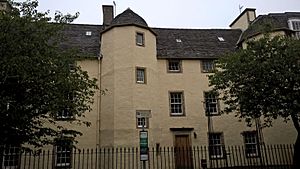 Dalry House is the oldest building in Dalry, built in 1661.

With the exception of the mill the area was primarily agricultural land, lying outside the Old Town of Edinburgh. The former mansion house, Dalry House, built about 1661 still exists. The house, once set in extensive grounds, is now surrounded by tenements and is located on Orwell Terrace. It was built probably for and later owned and occupied by the Chiesley family.

Dalry house and the surrounding lands passed to the Walker family between 1790 and 1812. In 1870 the house was sold to the Scottish Episcopal Church and from the late 19th century to about 1960 it was used as a teacher training college and by the Edinburgh & Leith Old People's Welfare Committee for social activities, classes and a lunch club until closed down in 2002. The actor Alastair Sim taught at the college between 1922 and 1924. The house was then renovated and converted into private flats in the early 21st century. 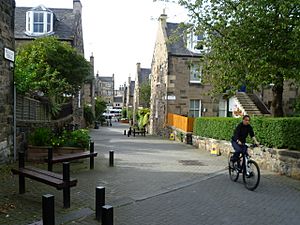 The Dalry 'colonies' are a series of terraced houses located in the north of Dalry.

Dalry was intensively developed in the 19th century and contains a mix of traditional tenements, "colonies" (terraced houses where one floor has an entrance at one side, and the other floor has an entrance on the other side; street names follow the buildings rather than the roads between them). The Dalry Colonies are located to the west end of the city centre and are concentrated on eight streets: Lewis Terrace, Walker Terrace, Douglas Terrace, Cobden Terrace, Argyll Terrace, Bright Terrace, Atholl Terrace and McLaren Terrace and Breadalbane Terrace. Four of the streets are named after politicians, prominent in the Anti-Corn Law League; Duncan McLaren, John Bright, Samuel Walker and Bailie David Lewis (editor of the weekly Reformer publication). The other names are places in Scotland. The Colonies in Dalry were built between 1868 and 1870 primarily built to house Caledonian Railway workers at the nearby Dalry Road Depot and Haymarket railway station. The Colonies are all today Category B Listed buildings.

The growth of industrial buildings, in proximity to the railway development of the time created new jobs in Dalry. These included employment with the railways themselves, as well as at the Fountain Brewery, the Caledonian Brewery, the North British Rubber Company's Castle Mill (1843) and the Grove Street Biscuit Factory (1868). This led to a surge in requirements for new residential development, leading to a significant boom in tenement housing building in the late 19th century by the Edinburgh Co-Operative Building Society and the General Property Investment Company, managed by the Scottish businessman and baronet Sir James Steel. Steel purchased the majority of the land remaining in the hands of the Walker family and the subsequent tenement flats on Murieston Crescent, Caledonian Place and Caledonian Crescent were all built by 1887 under his company.

In the Victorian and Edwardian periods a number of local landmarks were constructed, some of which remain today. Dalry for example has one of Edinburgh's Victorian swimming baths, now known as Dalry Swim Centre, in Caledonian Crescent. The area also used to have Scotland's second oldest cinema which opened in 1912 as 'The Haymarket Cinema', located at 90 Dalry road and changed to the Scotia in 1946. Only the foyer remains as a tattoo parlour (itself closed since 2016) and the main auditorium was demolished in 2013. 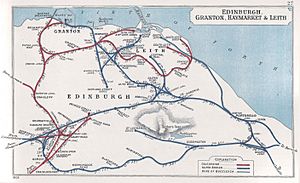 The north east of Dalry has seen major development including a former railway depot at Haymarket, which lay predominantly empty since its closure in the 1960s. The site was amongst those on the shortlist of potential locations for the Scottish Parliament Building. Construction of a new £200m retail, hotel and office development commenced in 2013 with work to reinforce the active rail tunnels under the site, which run east from Haymarket station to Edinburgh Waverley. Ground level construction commenced in May 2016, with the development scheduled to be completed by 2018.

In the early 21st century a substantial development occurred to the north west of Dalry on the industrial site of a former distillery that occupied land in both Dalry and in Haymarket. This was the Caledonian Distillery, a grain distillery, which was in operation from 1885 to 1988. The site is now occupied by 20 acres of private residential housing in an estate named Dalry Gait.

A series of railway works, the 'Dalry Road Depot' also existed to the east of Dalry, including a goods yard and several engine sheds. These were demolished in the 1960s (with the mains engine shed being demolished in October 1965) and converted into flats, parkland and a supermarket in the late 20th century. The railway works served the former Wester Dalry Branchline, which was a part of the Caledonian Railway to Leith via the now defunct Edinburgh Princes Street railway station. The railway had two stops in Dalry; 'Dalry Road' and 'Dalry Junction' (not to be confused with Dalry, Ayrshire). The Dalry Road Stop was a passenger station, built to meet demand following the tenement building boom in Dalry, and it opened in 1894. The station closed on 30 April 1962. The line is now closed and removed; a small section of the platform is visible on a park path near Orwell Terrace. The section of the line between Haymarket West Junction and the Dalry Junction station is now a roadway, the West Approach Road which takes traffic directly into the city centre.

The Balmoral bar was a former pub on Dalry road, which was destroyed by a fire in 2009. The collapse of the floor during the fire led to the death of one of the attending fire-fighters. The subsequent investigation into the Dalry fire led to the Scottish Fire and Rescue Service being fined following health and safety breaches.

There are three church buildings in Dalry. St Martin of Tours Episcopal Church, constructed in 1883 is located on Dalry Road and is still used for services. St Martin's is a Scottish Episcopal Church and is located within the Diocese of Edinburgh. The other two are former churches which no longer operate as religious buildings. St Bride's Community Centre is a local community education centre that offers classes and activities for adults and children. It is run jointly by a local charity, the St Bride's association and also by the City of Edinburgh Council. The centre occupies the former St Bride's Church, which was constructed in 1908. In addition the charity also runs an art and education centre, the Garvald Centre, on Orwell Place, adjacent to Dalry House. The Dalry Congregational Church, on Caledonian Road, was constructed in 1872 by Alexander Heron and has been converted into accommodation as flats.

Dalry has one school, built in 1876; the Dalry Primary School, for children in years 1 through to 7 in the Scottish Education System. The school won a Creative Learning Award in 2015. Dalry has two areas of parkland within its boundaries. The first is Murieston Park, a small community park with a child's playground, which is located on Murieston Crescent. A second area of parkland occupies part of the former railway goods yard and borders the West Approach Road. This includes a small sports pitch and children's playground.

Dalry Cemetery was designed by David Cousin in 1846 in the wake of the success of both Dean Cemetery in the west and Warriston Cemetery in the north. The cemetery was developed and owned by the Metropolitan Cemetery Association. It represented part of the second wave of cemetery building in the city, specifically serving the south-west sections. It was built on land that was part of the Dalry estate, which was variously owned by the Chieslies. It comprises 6 acres and is one of the smaller cemeteries in Edinburgh. The lodge house post-dates the main construction and was added in 1873, to a design by Peddie and Kinnear. The highly impressive Gothic entrance arch, built adjoining the lodge, was demolished in the 20th century. The cemetery was used most actively in the 19th century. However, the cemetery is the location of several 20th century Commonwealth War Graves, including the resting place of 24 casualties of the First World War and 2 of the Second World War. By the mid-1970s the cemetery was neglected and in great disrepair. A clean-up and improvement campaign was organised by the 'Action for Dalry Cemetery Group' resulting in a series of improvements completed by September 1976. In 1987 Edinburgh Council compulsorily purchased the cemetery and after further restoration it was reopened for access in May 1991. Adjacent to the cemetery is a long steep lane called 'Coffin Lane'. The lane is surrounded by high walls on both sides and has a nefarious reputation, being used as a murder location in several fiction books including the Rebus novel Let It Bleed by Ian Rankin. The novel Crime by Irvine Welsh also includes reference to Dalry.

All content from Kiddle encyclopedia articles (including the article images and facts) can be freely used under Attribution-ShareAlike license, unless stated otherwise. Cite this article:
Dalry, Edinburgh Facts for Kids. Kiddle Encyclopedia.