Fountainbridge (Scottish Gaelic: Drochaid an Fhuarain) is an area of Edinburgh, Scotland, a short distance west of the city centre, adjoining Tollcross with East Fountainbridge and West Port to the east, Polwarth to the west and south, Dalry and Haymarket to the north and Gorgie and North Merchiston to the west. The main streets through the area are Fountainbridge and Dundee Street.

The Union Canal which originally continued a short distance north-eastwards to Port Hopetoun at Lothian Road now terminates at the Lochrin Basin. The canal to the south and the route of the former Caledonian Railway (now converted to the West Approach Road) to the north continue to define the area. 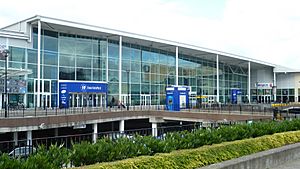 Originating as a new suburb created on the Dalry estate after 1696, the name "Fountainbridge" appears on John Laurie's A plan of the County of Mid-Lothian of 1763. According to the Edinburgh Evening Courant newspaper in 1774 the name derived from the Foullbridge Well of "singularly sweet water", south of the road and east of a burn and bridge 20 yards east of Gilmore Park. An earlier reference to the "lands of "Foulbriggs" exists from 1512. "Foul", pronounced "fool" in Scots and frequently encountered in the names of fords, signified "muddy", and "briggs" may have indicated the presence of another bridge further west on the Lanark Road. West Fountainbridge was named in 1869 and its western extension Dundee Street in 1885.

From the early 19th century until the late 20th century Fountainbridge was home to two of the city's major industries and a mixture of working-class tenement housing, which in part degenerated into some of the worst of the city's slums between the 1930s and the 1960s. Before being elected Prime Minister in 1964 the then Labour Party leader Harold Wilson toured the area and promised major redevelopment under a Labour government, though this did not take place for another generation.

In 1856 a wealthy US entrepreneur, Henry Lee Norris, established the North British Rubber Company in the buildings of the former Castle Silk Mill alongside the Union Canal. The company's Castle Mill premises eventually covered 20 acres of land in the area and employed thousands of workers over five generations in manufacturing a variety of products from galoshes and rubber Wellington boots to solid rubber wheels for Thomson steam traction engines (after 1870), pneumatic tyres (after 1890) and hot-water bottles. The company's design for trench boots, which was officially chosen by the War Office during the Great War, led to a lucrative government contract which saw the firm supplying up to 2750 pairs a day, reaching a total of 1.2 million pairs by the end of the war. Similar contracts resulted in the production of 1/4 of a million pairs of gymshoes, 47,000 pairs of heavy snow boots for the French Army, 16,000 tyres and 2.5 million feet of hosepipe. The Second World War brought another boom with the production of millions of civilian gas masks and barrage-balloon fabric. In 1958, the company produced Britain's first traffic cones for the M6 motorway. The United States Rubber Company gradually took control of the company. The United States Rubber Company was renamed Uniroyal in 1961 and North British took on this name when eventually taken-over in 1966. In that year, Uniroyal relocated the tyre manufacture to Newbridge, then outside Edinburgh. In 1957 Castle Mills began the production of Royalite thermoplastic sheeting. In 1967 Royalite production was moved to a new factory adjacent to the tyre plant at Newbridge. The manufacture of PowerGrip drive belts was relocated to the former Arrol-Johnston factory at Heathhall, Dumfries around 1970. All that remained at Castle Mills was the hose factory which continued until its closure in late 1973.

Another company which established itself in Fountainbridge in 1856 was McEwan's Brewery. The site on the north side of Fountainbridge and Dundee Street was chosen because of its proximity to both the Union Canal and the new line of the Caledonian Railway. Within five years, the firm's annual turnover was £40,000 and it went on to become one of the market leaders in the Scottish brewing industry over the next century. In 1973, as a result of a £13 million investment, a new Fountain Brewery was opened on the south side of Fountainbridge on the former site of the North British Rubber Company's premises.

Redevelopment of the area began with the construction of the Fountain Park leisure centre on former brewery ground on the north side of Dundee Street in 1998. This multi-purpose complex includes a multiplex cinema and ten-pin bowling.

Closure of the Fountainbridge brewery was announced in 2004 with the entire 22 acre site gradually decommissioned and demolished between and 2006 and 2011 as part of a wider redevelopment and regeneration programme which had begun with Edinburgh Quay at the Lochrin Basin on the canal in 2004.

In 2012, construction of new student accommodation for Edinburgh Napier University began on the south side of Fountainbridge opposite Fountain Park. Four concrete frame buildings contain 777 bedrooms in clusters of 6-8 bedrooms, each with a communal kitchen and dining area. 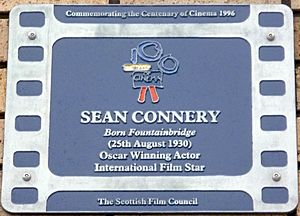 Sean Connery was born and grew up here. His former production company was known as Fountainbridge Films. He later shut down the company after a series of disputes with a business partner.

The Tollcross Local History Project published historical studies of the Tollcross, Fountainbridge and West Port areas which tell the stories of the people who lived in the area and worked at the factories, mills and breweries. Local family run businesses such as Dalton Scrap Metal and Lang's icecream shop are mentioned and William Mcgonagall lived nearby Anti-slavery campaigner Frederick Douglass lived locally in Gilmore Place during his time in Scotland.

All content from Kiddle encyclopedia articles (including the article images and facts) can be freely used under Attribution-ShareAlike license, unless stated otherwise. Cite this article:
Fountainbridge Facts for Kids. Kiddle Encyclopedia.