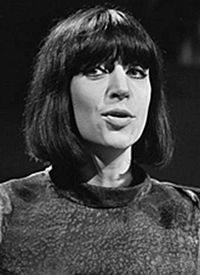 Anne Sylvestre ( born Anne-Marie Beugras 20 June 1934 – 30 November 2020) was a French singer-songwriter and guitarist. She was born in Lyon, France. She was known for her children's songs such as "Fabulettes" (1962). She also appeared many times as a musical guest on the television program Discorama.

Sylvestre died in Paris on 30 November 2020 from problems caused by a stroke, aged 86.

All content from Kiddle encyclopedia articles (including the article images and facts) can be freely used under Attribution-ShareAlike license, unless stated otherwise. Cite this article:
Anne Sylvestre Facts for Kids. Kiddle Encyclopedia.