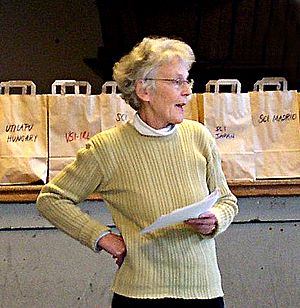 Anni Lanz (born 1945) is a Swiss human rights activist, with a focus on refugee policy in Switzerland. She was head of the refugee aid organization Solidarité sans frontières. She was nominated as one of five Swiss women in the 1000 Women project for the 2005 Nobel Peace Prize. In 2007, she was awarded the Fischhof Prize, which is awarded by the Foundation Against Racism and Anti-Semitism (GRA) and the Society for Minorities in Switzerland (GMS).

Anni Lanz studied at the Basel School of Applied Arts. She studied sociology at the University of Zurich and University of Basel.

On 19 December 2018, the district court of Brig District fined her for "human smuggling." She sees herself as an "escape assistant."

All content from Kiddle encyclopedia articles (including the article images and facts) can be freely used under Attribution-ShareAlike license, unless stated otherwise. Cite this article:
Anni Lanz Facts for Kids. Kiddle Encyclopedia.