Annie Maria Barnes (pen name, Cousin Annie; May 28, 1857 – unknown) was a 19th-century American journalist, editor, and author from South Carolina. At the age of eleven, she wrote an article for the Atlanta Constitution, and at the age of fifteen, she became a regular correspondent of that journal. In 1887, she began publishing The Acanthus, a juvenile paper issued in the South. Barnes published novels from 1887 (Some lowly lives and the heights they reached) until at least 1927 (A knight of Carolina).

Annie Maria Barnes was born in Columbia, South Carolina, May 28, 1857. She was a daughter of James Daniel and Henrietta Jackson Neville Barnes. Her mother, a Neville, traced her descent in a direct line from the Earl of Warwick. Her family was left at the close of the American Civil War, like most Southerners, without means.

Barnes was educated in the public schools of Atlanta, Georgia. She came from a family of editors, and naturally turned to literature. When 11 years of age, she wrote an article for the Atlanta Constitution, which was published and favorably noticed by the editor, and at 15, she became a regular correspondent of that journal. 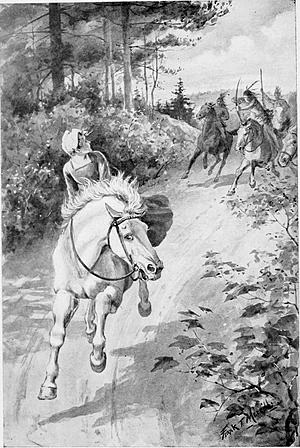 Before reaching middle age, Barnes had gained recognition in southern juvenile literature. Many of Barnes' earlier works appeared in the Sundayschool Visitor (juvenile periodical; Methodist Episcopal Church, South, Nashville, Tennessee). Barnes served as junior editor for the Woman's Board of Missions, Methodist Episcopal Church, South, having charge of its juvenile paper and of all its quarterly supplies of literature. She was a frequent contributor to leading journals, including Godey's Lady's Book. She served as the editor of Young Christian Worker and the Little Worker (Methodist Episcopal Church periodicals). In 1887, she began publishing a juvenile paper called The Acanthus (juvenile periodical; Atlanta; 1877–84), which was one of two juvenile papers published in the South at the time. While in literary character, it was a success, financially, like so many other southern publications, it was a failure.

Barnes' first book was Some Lowly Lives (Nashville, 1885); and it was followed by The Life of David Livingston (Nashville, Brigham and Smith; 1887), and Scenes in Pioneer Methodism (Nashville, Brigham and Smith; 1889). Later, she wrote The Children of the Kalahari, a child's story of Africa, which was very successful in the U.S. and in England. Two books were published in 1892, The House of Grass and Atlanta Ferryman: A Story of the Chattahoochee. Among her numerous stories which proved to be quite popular, were: Gospel Among the Slaves, The Ferry Maid of the Chattahoochee (Philadelphia, Penn Publishing Company), "ow Achon-hoah Found the Light (Richmond, Presbyterian Committee of Publication), Matouchon, The Outstretched Hand, Carmio, Little Burden-Sharers, Chonite, Marti, The King's Gift, The Red Miriok, The Little Lady of the Fort, Little Betty Blew, Mistress Moppet, A Lass of Dorchester (Boston, Lee and Shepard), Isilda, Tatong, The Laurel Token, and several others. Some of her works were written using the pen name, "Cousin Annie".

All content from Kiddle encyclopedia articles (including the article images and facts) can be freely used under Attribution-ShareAlike license, unless stated otherwise. Cite this article:
Annie Maria Barnes Facts for Kids. Kiddle Encyclopedia.