Summerville is a town in the U.S. state of South Carolina situated mostly in Dorchester County with small portions in Berkeley and Charleston counties. It is part of the Charleston-North Charleston-Summerville Metropolitan Statistical Area. The population of Summerville at the 2010 census was 43,392, and the estimated population was 44,719 as of July 1, 2013.

The center of Summerville is in southeastern Dorchester County; the town extends northeast into Berkeley and Charleston counties. It is bordered to the east by the town of Lincolnville and to the southeast by the city of North Charleston. The Summerville town limits extend south as far as the Ashley River next to Old Fort Dorchester State Historical Park.

There were 16,181 households out of which 38.6% had children under the age of 18 living with them, 48.9% were married couples living together, 15.4% had a female householder with no husband present, and 31.0% were non-families. 25.3% of all households were made up of individuals and 8.8% had someone living alone who was 65 years of age or older. The average household size was 2.55. 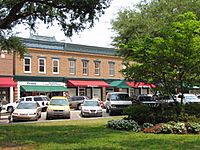 The first settlement in Summerville began following the American Revolutionary War; it was referred to as Pineland Village in 1785. Development in the area resulted from plantation owners who resided in the Charleston area, and who came to Summerville to escape seasonal insects and swamp fever.

Summerville became an official town in 1847. In that year, the town passed a law against cutting down trees of particular sizes, the first of such laws in the United States, and a $25 fine was issued upon any who did so without permission. Today, the motto upon the town's official seal reads "Sacra Pinus Esto (The Pine is Sacred)."

In 1899, the International Congress of Physicians (or "Tuberculosis Congress") listed Summerville to be one of the two best areas in the world for treatment and recovery of lung and throat disorders. It received such notation due to its dry and sandy location, and the many pine trees in the area that release turpentine derivatives into the air. This notation is credited with aiding the commercial and residential development of Summerville.

Starting in 1973, the town of Summerville has hosted the annual Flowertown Festival. It is the largest arts and crafts festival in South Carolina. It is held the first weekend of April in the Summerville Azalea Park. In 1925, these flowers led Summerville's Chamber of Commerce to adopt the slogan "Flower Town in the Pines."

Although Summerville claims to be "The Birthplace of Sweet Tea," this is actually false. Their declaration of being the first place to have sweet tea comes from a perceived notion that a receipt from 1890 containing "600 pounds of sugar and 880 gallons of iced tea" is enough to give themselves the title of "The Birthplace of Sweet Tea." However, the oldest known recipe for sweet iced tea was published in 1879 in a community cookbook called Housekeeping in Old Virginia by Marion Cabell Tyree, who was born in Texas.

All content from Kiddle encyclopedia articles (including the article images and facts) can be freely used under Attribution-ShareAlike license, unless stated otherwise. Cite this article:
Summerville, South Carolina Facts for Kids. Kiddle Encyclopedia.