Covic was a member of the Australian national team at the 2006 FIFA World Cup in Germany and represented Australia on two occasions.

Covic is of Croatian heritage. He is married to Vanessa Covic and has two children, Emelie and Christopher .

He formerly played for Marconi Stallions and Sydney Olympic in Australia's National Soccer League, PAOK Salonika and AO Kavala in Greece and Dinamo Zagreb in Croatia.

Leaving Australia in 1999 Covic made numerous appearances in various European clubs before arriving in Hammarby IF, a Swedish club based in Stockholm. There he battled Erland Hellström for the spot as first keeper, a fight where the outcome in no way was predetermined. About a month into the Swedish Allsvenskan series, Covic made his debut between the posts (however, not his debut game with Hammarby as he made an appearance roughly three weeks earlier in a cup game) and after that he was more or less given in the starting eleven.

Covic left Hammarby in 2006 after having played 121 games - a feat that has only been surpassed by three other goalkeepers in the history of the club. 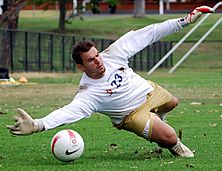 Ante Covic training with Newcastle in 2008.

Covic made his A-League debut in a 3–2 loss to Adelaide United in December 2006 at Hindmarsh Stadium. Čović was the starting goalkeeper for Newcastle Jets in the 2007 season which he won the A-League championship. On 17 March 2009, it was announced that Covic was leaving the Jets for a three-year deal with Swedish club IF Elfsborg.

On 4 October 2011, Covic signed a one-year deal with Melbourne Victory as an injury replacement for Tando Velaphi who was ruled out for 12 weeks. Čović debuted in the opening game for the A-League season against Sydney FC at Etihad Stadium in front of 40,000 in attendance. Covic achieved instant hero status with the home fans when he thwarted Emerton from the penalty spot in the 33rd minute, he was named man of the match in the 0–0 draw. He was again named man of the match after the Melbourne Derby two weeks later.

In the A-League round 5 match between Brisbane Roar and Melbourne Victory in 2011, Covic, along with fellow Victory defender Matthew Foschini, were controversially sent off by referee Ben Williams for challenges against Roar defenders, reducing the Victory to playing with nine men throughout the match.

On 1 May 2012, it was announced new Melbourne Victory coach Ange Postecoglou would not resign the veteran goalkeeper, opting to stay with younger goalkeepers Lawrence Thomas and Tando Velaphi. The shock decision came after Covic was awarded the Player's Player of the Year award at the Melbourne Victory Awards Dinner.

On 2 July 2012, Covic joined A-League expansion club Western Sydney Wanderers on a free transfer. The Wanderers performed above expectations and won the Premier's Plate in their maiden season, with Čović being named in the inaugural A-League All-Star team. He helped his side to win 2014 AFC Champions League, with keeping 8 clean sheets in 12 matches. At the end of the final which they defeated Al-Hilal, he was named as MVP of the tournament.

In June 2016, at the end of his contract, Covic decided to leave Perth Glory to return east to be closer to his family, and joined Rockdale City Suns in January 2017. He retired from football at the end of the 2018 NPL season in November 2018, after two seasons at the club, to take a position as goalkeeper coach for Marconi Stallions. In December, he joined Wellington Phoenix as short-term injury cover following an injury to first-choice goalkeeper Filip Kurto. He remained on the bench for the duration of the side's 3–1 win over Sydney FC.

He was part of the Australian squad for the 2006 World Cup play-offs against Uruguay and was Australia's third choice goalkeeper behind Mark Schwarzer and Zeljko Kalac for the finals in Germany.

He made his debut for Australia against Bahrain on 22 February 2006 in an Asian Cup qualifier. On 22 March 2008 he earned his second and last cap against Singapore in an international friendly and was captain for part of the second half after Harry Kewell and Jade North left the field.

All content from Kiddle encyclopedia articles (including the article images and facts) can be freely used under Attribution-ShareAlike license, unless stated otherwise. Cite this article:
Ante Covic Facts for Kids. Kiddle Encyclopedia.