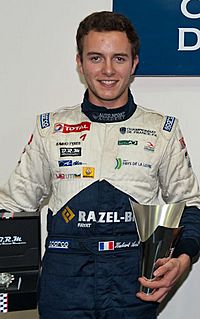 On 31 August 2019, Hubert was involved in a crash during the Formula 2 feature race at Circuit de Spa-Francorchamps in Stavelot, Belgium. He died of his injuries a short time later. He was 22.

All content from Kiddle encyclopedia articles (including the article images and facts) can be freely used under Attribution-ShareAlike license, unless stated otherwise. Cite this article:
Anthoine Hubert Facts for Kids. Kiddle Encyclopedia.