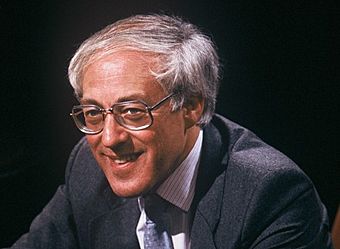 Appearing on television discussion programme After Dark in 1987

Professor Anthony Smith CBE (born 1938) is a British broadcaster, author and academic. He was President of Magdalen College, Oxford, between 1988 and 2005. He worked for the Annan Committee on The Future of Broadcasting, and became engaged in the national debate which led to the foundation of the UK's Channel 4.

All content from Kiddle encyclopedia articles (including the article images and facts) can be freely used under Attribution-ShareAlike license, unless stated otherwise. Cite this article:
Anthony Smith (producer) Facts for Kids. Kiddle Encyclopedia.