Museum of the Moving Image (London) 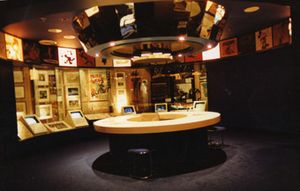 The ceiling of MOMI's animation area revolved. Its design was based on a 19th-century Praxinoscope.

The Museum of the Moving Image (MOMI) was a museum of the history of cinema technology and media sited below Waterloo Bridge in London. It was opened on 15 September 1988 by Prince Charles. The museum formed part of the cultural complex on the South Bank of the River Thames. MOMI was mainly funded by private subscription and operated by the British Film Institute. MOMI was closed in 1999, initially on a supposedly temporary basis, and with the intention of its being relocated to Jubilee Gardens nearby. Its permanent closure was announced in 2002. 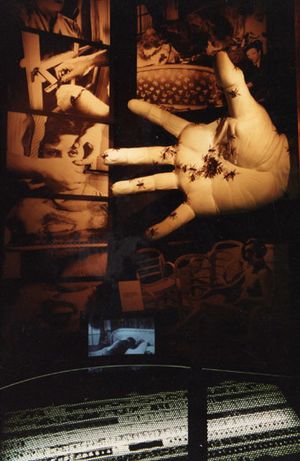 Surreal cinema was just one of the genres of film displayed within MOMI.

A series of temporary exhibitions were held in the final room at the end of the museum tour:

MOMI was housed in a glass-sided steel framed metal-clad building (designed by Bryan Avery of Avery Associates Architects), with red roofs running along each side of Waterloo Bridge.

An exhibition called Moving Pictures ran at the Sheffield Millennium Galleries 14 February – 19 May 2002. The exhibition offered a scaled down version of MOMI using actors and items from the museum collection to tell the history of the moving image. It was planned as the first location of a touring exhibition but was not well received and the tour was cancelled. Later in October 2002 the BFI announced it no longer planned to recreate MOMI.

The MOMI programme was discontinued and its site reopened as BFI Southbank on 14 March 2007, providing a new entrance to the National Film Theatre complex. A programme of commissioned artists' moving image work was seen as a better fit for the BFI's remit to promote the moving image in all its forms than that of MOMI: an Exhibitions Department was established and a contemporary art gallery dedicated to the moving image opened, the BFI Gallery, which itself was replaced in 2012 by the BFI Reuben Library. The remaining site incorporated the existing three cinemas showcasing the best historical and contemporary film from around the world, a mediatheque of British film and television, and a bookshop within an active programme that includes the annual London Film Festival.

Although there was talk that Bradford's National Media Museum planned to open a London venue, London still has no publicly funded film museum.

In April 2018 one of the lead members of the original MOMI team, David Francis, with his wife Jocelyn Marsh (daughter of award-winning production designer Terence Marsh), opened the Kent Museum of the Moving Image in Deal, Kent.

All content from Kiddle encyclopedia articles (including the article images and facts) can be freely used under Attribution-ShareAlike license, unless stated otherwise. Cite this article:
Museum of the Moving Image (London) Facts for Kids. Kiddle Encyclopedia.