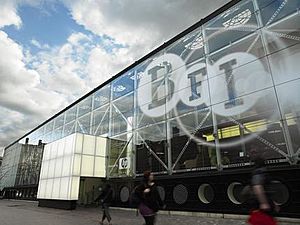 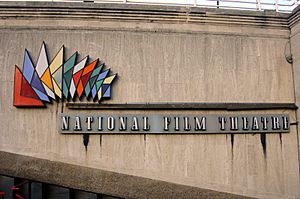 BFI Southbank (from 1951 to 2007, known as the National Film Theatre) is the leading repertory cinema in the UK, specialising in seasons of classic, independent and non-English language films. It is operated by the British Film Institute.

The National Film Theatre was initially opened in a temporary building (the Telekinema) at the Festival of Britain in 1951 and moved to its present location in 1957, replacing the Thameside restaurant on the site. Subsequently, Southbank Centre expanded its buildings to meet the National Film Theatre from the south, while the Royal National Theatre now occupies the area to the north-east.

On 14 March 2007, the National Film Theatre was relaunched as BFI Southbank in considerably enlarged premises, taking over space that had been used by the Museum of the Moving Image. In addition to the three pre-existing auditoria, the complex now includes a studio, a médiathèque, gallery space, a shop, and a bar and restaurant run by Benugo.

It is sited below the southern end of Waterloo Bridge, forming part of the cultural complex on the South Bank of the River Thames in London. The site comprises three cinemas and studio space, as well as cafes and exhibition space. It also has a large bar area in the foyer where smaller performances are sometimes held.

All content from Kiddle encyclopedia articles (including the article images and facts) can be freely used under Attribution-ShareAlike license, unless stated otherwise. Cite this article:
BFI Southbank Facts for Kids. Kiddle Encyclopedia.