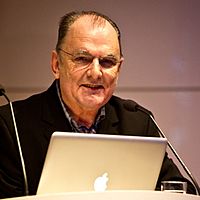 Bryan Robert Avery MBE RIBA (2 January 1944 – 4 July 2017) was an English architect. He was born in Berkshire, England. He was best known for designing the Royal Academy of Dramatic Art (RADA).

After his childhood years spent in Lymington in the New Forest, Hampshire, he studied architecture at Leicester College of Art (now the De Montfort University), followed by a MA in the History and Theory of Architecture at Essex University under Professors Joseph Rykwert and Dalibor Vesely.

All content from Kiddle encyclopedia articles (including the article images and facts) can be freely used under Attribution-ShareAlike license, unless stated otherwise. Cite this article:
Bryan Avery Facts for Kids. Kiddle Encyclopedia.