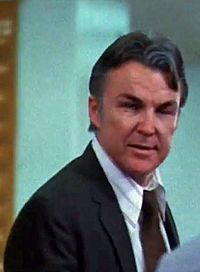 Anthony Zerbe in trailer for The Laughing Policeman (1973)

Zerbe was born in Long Beach, California. He studied at Pomona College. He married Arnette Jens in 1962. They have two children.

His career began in 1963. Zerbe's movie roles include the post-apocalyptic cult leader Matthias in The Omega Man, a 1971 movie adaptation of Richard Matheson's 1954 novel, I Am Legend; as a corrupt gambler in Farewell, My Lovely; as Abner Devereaux in Kiss Meets the Phantom of the Park; as villain Milton Krest in the James Bond movie Licence to Kill; Rosie in The Turning Point, Admiral Dougherty in Star Trek: Insurrection and Councillor Hamann in The Matrix Reloaded and The Matrix Revolutions.

In 1976, Zerbe won an Emmy Award for Outstanding Continuing Performance by a Supporting Actor in a Drama Series for his role as Lieutenant K.C. Trench in the private detective series Harry O.

His latest appearance is in the 2013 American black comedy-crime movie American Hustle.

All content from Kiddle encyclopedia articles (including the article images and facts) can be freely used under Attribution-ShareAlike license, unless stated otherwise. Cite this article:
Anthony Zerbe Facts for Kids. Kiddle Encyclopedia.