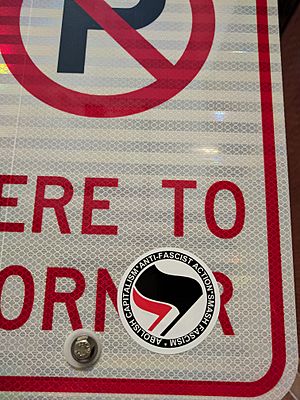 An antifa sticker on a road sign in Duluth, Minnesota, 2017

The antifa, short for anti-fascist, movement in the United States is a militant left-wing, anti-fascist political activist movement. It is made up of activist groups that protest with the use of direct action instead of policy changes.

The methods include protesting, digital activism, property damage, physical violence and harassment against those who they see as fascist, racist, or on the far-right.

It has been called a terrorist movement by President Donald Trump after the group took part in the George Floyd protests in 2020.

All content from Kiddle encyclopedia articles (including the article images and facts) can be freely used under Attribution-ShareAlike license, unless stated otherwise. Cite this article:
Antifa (United States) Facts for Kids. Kiddle Encyclopedia.