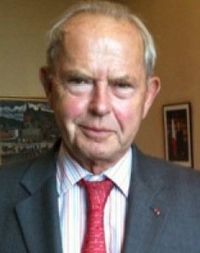 Antoine Rufenacht (11 May 1939 – 5 September 2020) was a French right-wing The Republicans politician. He was the Mayor of Le Havre between 23 June 1995 to 24 October 2010. He was replaced by future Prime Minister Édouard Philippe. He was born in Le Havre.

In 2007, he was seen as a possible Prime Minister pick for President Nicolas Sarkozy.

All content from Kiddle encyclopedia articles (including the article images and facts) can be freely used under Attribution-ShareAlike license, unless stated otherwise. Cite this article:
Antoine Rufenacht Facts for Kids. Kiddle Encyclopedia.