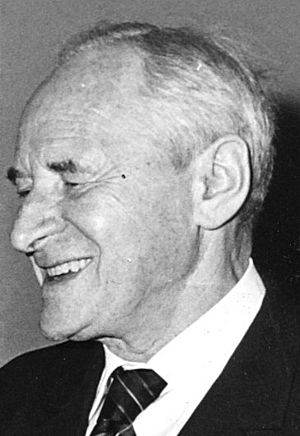 Anton Levien Constandse (September 13, 1899 in Brouwershaven - March 23, 1985 in The Hague) was a Dutch journalist, writer, political activist, anarchist and atheist.

Constandse studied Spanish at the University of Amsterdam.

Although raised a Christian, he turned atheist.

After the war he was editor at NRC Handelsblad. He wrote for De Groene Amsterdammer, Vrij Nederland, and various humanist, atheist and literary magazines. Furthermore, he spoke on the Dutch VPRO radio and lectured at the University of Amsterdam.

Constandse was very negative about Christianity and later on also about Islam.

He wrote a lot of books and brochures about atheism and anarchism.

All content from Kiddle encyclopedia articles (including the article images and facts) can be freely used under Attribution-ShareAlike license, unless stated otherwise. Cite this article:
Anton Constandse Facts for Kids. Kiddle Encyclopedia.