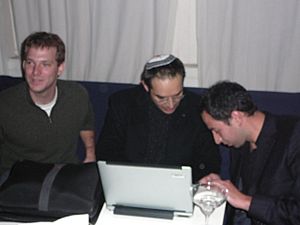 Sometimes he is called one of the fathers of the Russian Internetor the first Russian-language blogger in the history. He was editor of the largest online news publications Vesti.ru, Lenta.ru, Gazeta.ru and NEWSru.com.

All content from Kiddle encyclopedia articles (including the article images and facts) can be freely used under Attribution-ShareAlike license, unless stated otherwise. Cite this article:
Anton Nossik Facts for Kids. Kiddle Encyclopedia.