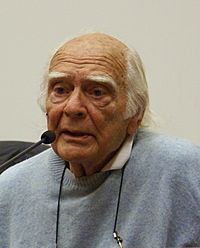 Antonio Isasi-Isasmendi Lasa (22 March 1927 – 28 September 2017) was a Spanish movie director, producer, screenwriter and movie editor. He was born in Madrid, Spain. In the mid-1960s he directed a series of action movies designed for the wider European market including Scaramouche (The Adventures of Scaramouche) in 1963 and Estambul 65 (That Man in Istanbul) in 1965. He made some English-language movies, most notably They Came to Rob Las Vegas.

In 1981, he was the a member the jury at the 31st Berlin International Film Festival.

All content from Kiddle encyclopedia articles (including the article images and facts) can be freely used under Attribution-ShareAlike license, unless stated otherwise. Cite this article:
Antonio Isasi-Isasmendi Facts for Kids. Kiddle Encyclopedia.