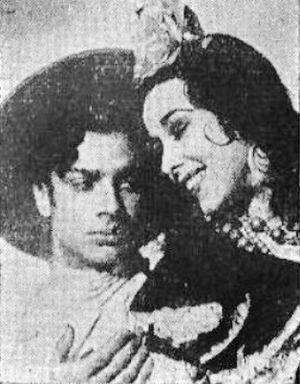 Antonio Ruiz Soler (Seville, 4 November 1921 – Madrid, 6 February 1996), was a Spanish flamenco dancer, choreographer and dance director. He was professionally known as Antonio or Antonio el bailarin (Antonio the dancer). With his cousin Rosario (Florence Pérez Padilla) he had a partnership which was world-famous for 25 years (1928–1953). They were billed as Antonio and Rosario.

In 1952 he formed his own Spanish ballet company, Antonio and the Ballets de Madrid, and Rosario also formed a company, partnered for a while by Iglesias. Antonio and Rosario performed together again in his 1964 season in London and New York. Antonio choreographed many works in Spanish and classical style; several were taken up by other companies.

All content from Kiddle encyclopedia articles (including the article images and facts) can be freely used under Attribution-ShareAlike license, unless stated otherwise. Cite this article:
Antonio Ruiz Soler Facts for Kids. Kiddle Encyclopedia.