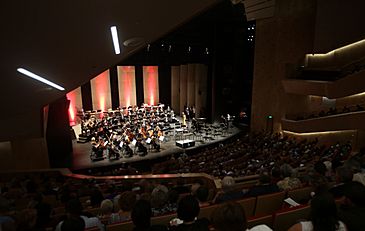 The Aotea Centre is a performing arts and events centre in the Auckland CBD, Auckland Tāmaki Makaurau, Aotearoa New Zealand. Located at the western edge of Aotea Square, off Queen Street, the centre provides a cultural, entertainment and conventions venue space in the heart of the city, and is managed by Auckland Unlimited (which also operates the Auckland Town Hall and The Civic, both in the vicinity of the Square). The origin of its name is Motu Aotea, the Māori name for Great Barrier Island, which is the largest offshore island of New Zealand and approximately 90 km from downtown Auckland.

The main construction of the centre was finished in 1989, having cost NZ$128.5 million. The centre officially opened the following year.

Designed by the City architect Ewen Wainscott in 1974, the building was not actually built until more than a decade later. It won the NZIA Silver Medal award. Costs escalated greatly during construction resulting in several features being omitted. Due to poor acoustics, the main auditorium required a refit in the mid-1990s and undergoing refirbishment in 2012. In the wake of this, the theatre won the inaugural Best Medium Venue at the Entertainment Venues of New Zealand (EVANZ) awards in late 2013.

The Centre provides a range of foyers, gallery spaces, and function rooms as well as the 2,139 seat Kiri Te Kanawa Theatre ( formerly ASB Theatre, renamed in 2019) and the much smaller, 186-seat Herald Theatre, which is mainly used by small independent theatre companies.

In 2000 a design competition was held for the Aotea Precinct, and the winner was the landscape architecture-urban design team consisting of Ted Smyth, Rod Barnett and Dushko Bogunovich.

In 2011, an upgrade of Aotea Square also included a major facelift of the public stairs in front of the Centre, including creating a cafe space (The Terrace Café) under a large veranda open to the Square.

Several significant New Zealand artworks are on display in the foyers of the Aotea Centre, including the acclaimed digital work, Ihi, by Lisa Reihana.

All content from Kiddle encyclopedia articles (including the article images and facts) can be freely used under Attribution-ShareAlike license, unless stated otherwise. Cite this article:
Aotea Centre Facts for Kids. Kiddle Encyclopedia.