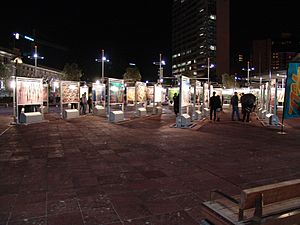 Aotea Square is a large paved public area in the CBD of Auckland, New Zealand. Officially opened in 1979 by Sir Dove-Myer Robinson next to Queen Street, it is used for open-air concerts and gatherings, and markets and political rallies. In November 2010, a major redevelopment of Aotea Square was completed. The square was redesigned to make it appropriate for use by crowds of up to 20,000 people.

Its name is derived from Motu Aotea, the Māori name for Great Barrier Island, which is the largest offshore island of New Zealand, approximately 90 km from downtown Auckland. 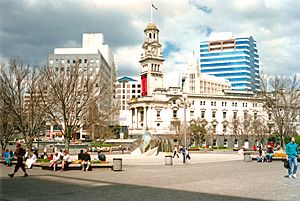 The square was created in 1979, with a large part of it being the former end of Grey's Avenue, which used to connect directly to Queen Street - a large underground carpark with 930 spaces had been erected underneath in 1975.

In 2000 a competition for a redesign was held, but in 2004, before the winning design by Ted Smyth and Associates (including Rod Barnett and Dr Dushko Bogunovich) could be built, damage to the car park roof was discovered, which stopped the project. While the roof was temporarily stabilised and plans for its repair made, a consultation process initiated by mayor Dick Hubbard called 'Outside the Square' resulted in a new proposal. This proposal was abandoned after it was estimated to cost up to $600 million. After this the old design was revised several times (including some feedback from public consultation in August 2008) and was adopted in 2008. 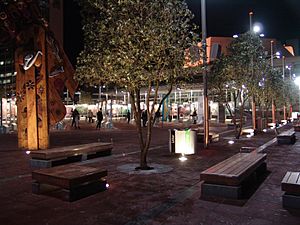 Aotea Square at night after the refurbishment in 2010

Construction started in November 2008 and ran to late 2010, during which there were no events in the square. The project was projected to cost NZ$80 million, around $45 million for the car park repair, $25 million for the upgrade, and $10 million for works on the Aotea Centre facade. A cost saving of $15 million was identified during the process due to a modified construction process for the car park roof, which allowed the project to dispense with building a temporary car park. 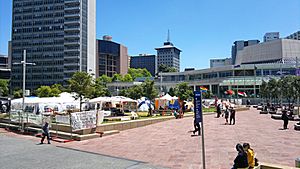 Aotea Square in 2011 during the Occupy movement

Aotea Square was site of a major civil disturbance on 7 December 1984, during a free end-of-academic year rock concert given by bands including Herbs and DD Smash.

Beginning on 15 October 2011, the square was the site of an Occupy Movement protest. Protesters pitched tents and erected ad hoc shelters and camped on the grassy areas. The occupation was over by the end of January, with a total of 30 arrests.

In the square facing west toward the Aotea Centre

The Edwardian Auckland Town Hall is at the Queen Street entrance to the square. It has a main concert chamber with excellent acoustics, and was extensively restored and upgraded in 1994.

To the south of the square are the Administration block of the Auckland City Council and the entry to Myers Park.

On the western side of the square is Auckland's main conference and theatre venue, the Aotea Centre. The foyer contains art works by many New Zealand artists including a full-length portrait in bronze of Dame Kiri Te Kanawa by Terry Stringer.

To the north of the square is a cinema/theatre complex which includes the Event Cinema venue in the IMAX centre, and the 1929 Civic Theatre, which was built in the atmospheric theatre style; its main chamber is illuminated with lights placed to correspond with the constellations of the southern night sky.

Aotea Square was originally the location of a swamp, filled and drained by the Waihorotiu Stream. The stream was turned into an open sewer canal and eventually bricked over and the swampy area drained. A three-storey underground parking garage accessible from Mayoral Drive and Greys Avenue was constructed in the 1970s. 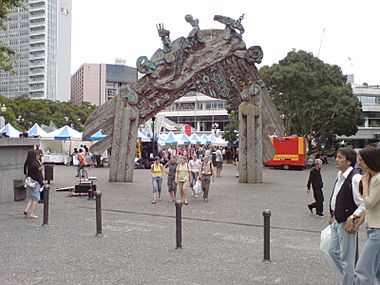 A number of art works are in Aotea Square:

All content from Kiddle encyclopedia articles (including the article images and facts) can be freely used under Attribution-ShareAlike license, unless stated otherwise. Cite this article:
Aotea Square Facts for Kids. Kiddle Encyclopedia.