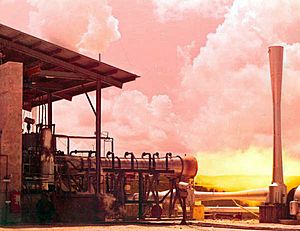 since the 1940s, there was heavy research into Hydrogen as a fuel source starting in 1945. The Air Force wanted to create a faster plane for spying than the U-2.

In 1956, Pratt and Whitney along with the United States Air Force decided to buy a 10 square mile piece of land in Western Palm Beach County.

At the time, the western part of Palm Beach County was sparsely populated. Authorities said it was a fertilizer producing town to cover up the operation so that residents would not be suspicious. The name Apix meant Air Products Inc, Experimental. There was also commercial protection to make sure that potential speculators and buyers stayed clear. Land nearby was also platted and had a census marker. Pratt & Whitney bought 9,000 acres near what would today be the J.W. Corbett Wildlife Refuge. For buyers to not know it was United Aircraft (now United Technologies) a third party had bought a ranch and gave it to the Florida Game and Fresh Water Fish Commission which then was given to the U.S Air Force.

The project's main goal was to test Liquid Hydrogen as a fuel source for rockets which had been in interest of the United States government since the late 1940s. Apix was part of what was called Project Suntan that was carried out in extreme secrecy from 1956-1958. The plant could liquefy Hydrogen at approximately rate of a half a ton a day, costing $6.2 million a day ($53,580,135.23 in 2017) and would be transported in an underground pipeline to a testing facility. A second plant was built in 1959 and had a capacity of 30 tons and cost about $27 million. In February 1959 the managers had decided that transporting liquid hydrogen in the underground pipeline took too much energy and decided to close it. Instead, they decided to ship hydrogen in insulated tanks on the Beeline Highway.

All content from Kiddle encyclopedia articles (including the article images and facts) can be freely used under Attribution-ShareAlike license, unless stated otherwise. Cite this article:
Apix, Florida Facts for Kids. Kiddle Encyclopedia.