Apollodorus of Damascus facts for kids

Apollodorus of Damascus (Ancient Greek: Ἀπολλόδωρος ὁ Δαμασκηνός) was a Nabatean architect and engineer from Damascus, Roman Syria, who flourished during the 2nd century AD. As an engineer he authored several technical treatises, and his massive architectural output gained him immense popularity during his time. He is one of the few architects whose name survives from antiquity, and is credited with introducing several Eastern innovations to the Roman Imperial style, such as making the dome a standard.

Apollodorus was born in Damascus, Syria, at a time when it was either ruled by Nabataeans, or when they had substantial presence in it, circa 50 AD. Apollodorus is said to be of Nabataean ethnic extraction himself, and Damascus was part of the Roman Empire during his adulthood. Little is known of his early life, but he started his career as a military engineer before meeting emperor Trajan and accompanying him during the Second Dacian War in 105 AD.

Apollodorus was Trajan's favored architect and engineer. He designed and oversaw the construction of the Forum, Markets, and Temple, and Column of Trajan (the first monument of its kind), and the Stadium of Domitian within the city of Rome. Outside the capital, Apollodorus built bridges across the Danube and the Tagus in Spain and designed the triumphal arches of Trajan at Benevento and Ancona. He is the author of Siege Engines (Πολιορκητικά), dedicated to an unnamed emperor, likely Trajan. 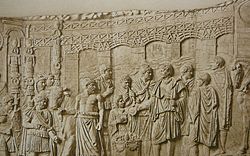 The monumental Danube Bridge of Apollodorus. Apollodorus himself stands in the foreground behind the sacrificing emperor.

Fiorella Festa Farina, Director of the Italian Institute of Culture in Damascus, described the technical prowess of Apollodorus as stemming from his cultural roots and the architectural tradition of Syria, owing his mastery to "Nabataean culture filtered through Greek modes of thought." He was known for his practical and robust designs. It was likely due to his influence that domes became a standard element in Roman architecture.

Cassius Dio reports that Apollodorus offended Hadrian by dismissing and ridiculing the emperor's forays into architecture, which led to his banishment and death (although doubts have been raised concerning the veracity of Dio's claim).

Apollodorus of Damascus plays an important role in the later part of the historical novel Empire by Steven Saylor. The (fictional) protagonist Marcus Pinarius, a talented young sculptor and architect, becomes Apollodorus' protege, accompanies him during the war in Dacia and on various building projects in Rome, and later marries Apollodorus' daughter. After Apollodorus' banishment, Pinarius takes his place as the favorite architect of Hadrian. While all that is fictional, the book follows the known facts of Apollodorus' life (and accepts the account of his death at Hadrian's hands).

All content from Kiddle encyclopedia articles (including the article images and facts) can be freely used under Attribution-ShareAlike license, unless stated otherwise. Cite this article:
Apollodorus of Damascus Facts for Kids. Kiddle Encyclopedia.