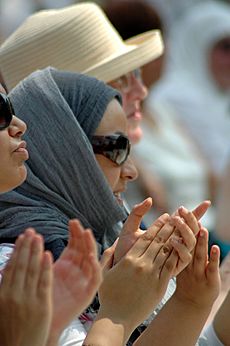 Applause is the noise made by an audience who are clapping their hands (applauding) to thank someone for a performance. People at a concert usually applaud when the performers come onto the stage. This is a way of welcoming them. At the end of a performance people applaud again to thank the performers.

People may applaud after someone makes a speech or at a sporting match. They will applaud after a play in the theatre or at the end of an opera. The length of applause (how long they applaud for) may depend on how much they liked the performance. If they liked it very much they may also shout "BRAVO!". When an audience applauds with really wild excitement it is called an "ovation". Very occasionally (in English-speaking cultures) an audience might all stand up as well. This is called a "standing ovation".

All content from Kiddle encyclopedia articles (including the article images and facts) can be freely used under Attribution-ShareAlike license, unless stated otherwise. Cite this article:
Applause Facts for Kids. Kiddle Encyclopedia.