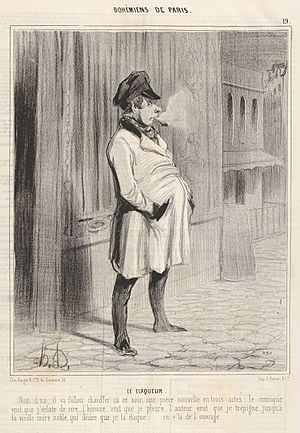 A claque (pronounce: ‘clack’) is a small group of people in an opera house who deliberately either clapped loudly (applauded) or shouted boo for a particular singer. Usually it means an organised group who know in advance what they are going to do.

In the 19th century there was very often a claque at performances of an opera. Someone who liked one of the singers and wanted them to have lots of applause would pay a group of people to sit near the back of the opera house and to clap and shout enthusiastically whenever that singer had finished a song. This would encourage the rest of the audience to clap loudly too. Sometimes the claque would be paid to do the opposite: they would be told to hiss and boo when the singer had sung.

Very often a singer would have to pay some money to the claque so that they would applaud him (or her). If the singer did not pay, the claque would hiss and boo. This was, of course, a nasty form of blackmail. In the early 20th century, when the world-famous tenor Enrico Caruso refused to pay the claque in Naples a bribe, they hissed during his singing of the great aria Una furtiva lagrima.

All content from Kiddle encyclopedia articles (including the article images and facts) can be freely used under Attribution-ShareAlike license, unless stated otherwise. Cite this article:
Claque Facts for Kids. Kiddle Encyclopedia.