There is a marker at Appomattox Depot that explains the final blow to General Robert E. Lee at the Battle of Appomattox Station, 1865:

You are standing near the site of Appomattox Station Depot on the South Side Railroad. Here, on the afternoon of April 8, 1865, Union cavalrymen under Gen. George A. Custer dealt the Army of Northern Virginia a final blow. First, they captured trains loaded with supplies for Confederates, then they attacked and captured Gen. R. Lindsay Walker’s wagons and artillery in bivouac half a mile to the north.

When word of this disaster reached Gen. Robert E. Lee at his headquarters a few miles northeast, he knew the end was near. He and Gen. Ulysses S. Grant had exchanged letters on the subject of surrender, and Lee had suggested a meeting between the lines the next day. With Union horsemen now blocking his escape route, Lee’s only hope lay in punching through them with a combined force of infantry and cavalry, and he scheduled a breakout attack for dawn. If it failed, or if he found Federal infantry in front of him as well, then he would have no choice but to surrender. 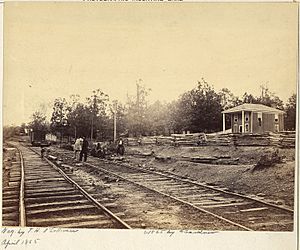 All content from Kiddle encyclopedia articles (including the article images and facts) can be freely used under Attribution-ShareAlike license, unless stated otherwise. Cite this article:
Appomattox Station Facts for Kids. Kiddle Encyclopedia.