Kids Encyclopedia Facts
This page is about the neighborhood in Portland, Oregon. For other uses, see Arbor Lodge (disambiguation).

The North Lombard Transit Center and the Rosa Parks stations on the MAX Yellow Line provide light rail service to the neighborhood. Their opening in 2004 was part of a spurt of new development in the neighborhood, including a New Seasons Market and a Fred Meyer mega-store.

The neighborhood is the location of Arbor Lodge Park. 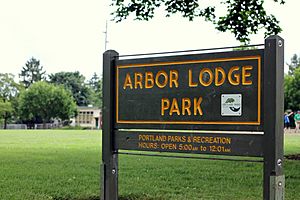 All content from Kiddle encyclopedia articles (including the article images and facts) can be freely used under Attribution-ShareAlike license, unless stated otherwise. Cite this article:
Arbor Lodge, Portland, Oregon Facts for Kids. Kiddle Encyclopedia.