Overlook is a neighborhood in the North section of Portland, Oregon on the east shore of the Willamette River. It borders University Park and Arbor Lodge on the north, Humboldt and Boise on the east, Eliot on the southeast, and Northwest Industrial and the Northwest District across the Willamette on the west. 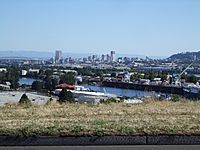 Downtown Portland with Swan Island in the foreground.

The Overlook Park Station, the N. Prescott St. Station and the N. Killingsworth Station on the MAX Yellow Line provide light rail service to the neighborhood.

The neighborhood includes Swan Island, originally an island in the Willamette, but connected to the east bank by landfill in the 1920s. Swan Island was the site of Portland's first airport, Swan Island Municipal Airport, dedicated by Charles Lindbergh in 1927 and operating until the early 1940s when the island was converted to naval shipbuilding use for World War II as one of the Kaiser Shipyards. Swan Island is now an industrial area.

This neighborhood is also occasionally referred to as Mocks Crest.

All content from Kiddle encyclopedia articles (including the article images and facts) can be freely used under Attribution-ShareAlike license, unless stated otherwise. Cite this article:
Overlook, Portland, Oregon Facts for Kids. Kiddle Encyclopedia.