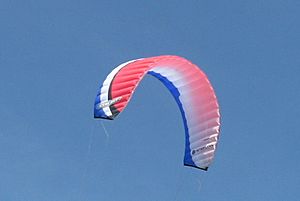 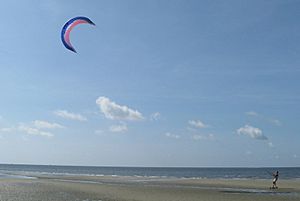 The arckite or twinskin kite is a type of traction kite designed and patented by Peter Lynn. It is a very stable, safe and secure type of powerkite. It can be used for all kinds of kite powered sports, for example: kiteboarding, landboarding, kite buggying or snowkiting. The shape of the kite is similar to a C shaped leading edge inflatable kite, however the construction is similar to a foil kite. These kites also fall into a category of foils called "closed-cell inflatables", meaning that the ram-air inlets on the leading edge of the kite are normally closed by flaps that act as one-way valves to maintain internal air pressure. It is this feature that makes the kite useful for kitesurfing since, unlike standard open-cell foils, if the kite crashes on the water, it will stay inflated and float long enough for the rider to recover and re-launch.

Depending on the specific style of the kite its suitable better for different usages, however, each of the kites can be used on all terrain.

Kites which are not as easy to water relaunch, but have better depower and upper wind range.

All content from Kiddle encyclopedia articles (including the article images and facts) can be freely used under Attribution-ShareAlike license, unless stated otherwise. Cite this article:
Arc kite Facts for Kids. Kiddle Encyclopedia.