After graduating, Alexander worked as a foreman for Marsh Engineering Company before forming his own engineering company at the age of 26. Alexander's firm, named A. A. Alexander, Inc., initially specialized in bridges. He partnered with white contractor George F. Higbee for eight years before Higbee's death. After Higbee's death, Alexander ran the company alone for four years. His significant projects during this time included the University of Iowa's heating and cooling system.

In 1926, Alexander was honored with a Harmon award for his distinguished achievement in business and engineering. The same year, he also received the Laurel Wreath Award, Kappa Alpha Psi's highest award for lifetime achievement.

In 1929, he took on his former classmate and football teammate Maurice A. Repass as a junior partner and changed the firm's name to Alexander & Repass. Their first major project was a multimillion-dollar sewage treatment plant in Grand Rapids, Michigan. Their work also focused on many roads and bridges across the nation, including construction of the Whitehurst Freeway and an extension to the Baltimore–Washington Parkway. The firm was hired to build a bridge and seawall at the Tidal Basin in Washington DC, where Alexander brought in an integrated construction crew. Their firm also constructed the Moton Airfield, where the Tuskegee Airmen trained, as well as an apartment building for the National Association for Colored Women. Alexander's firm became so successful Ebony magazine declared it "the nation's most famous interracial business" in 1949. Ultimately, Alexander spearheaded over 300 projects throughout his career.

In 1925, the University of Iowa granted him an honorary master's degree in engineering. Howard University awarded Alexander with an honorary Doctor of Engineering in 1946. Although some sources claim Alexander was awarded the NAACP's prestigious Spingarn Medal, the NAACP does not list him as a recipient.

Alexander began his political career in 1932 when he served as the assistant chairman of the Iowa Republican State Committee, a position he held again in 1940. In 1934, Alexander was appointed as part of an investigative team which looked into economic development possibilities for Haiti. Throughout the 1930s, Alexander was an active member of the Republican party. He aggressively campaigned for Dwight D. Eisenhower's White House bid in 1952. In addition to his work for the Republican Party, Alexander was also active in African American organizations. Alexander served as the charter member and 1944 president of the Des Moines chapter of the NAACP. He was also president of the Negro Community Center Board and a trustee at both Howard University and Tuskegee Institute. 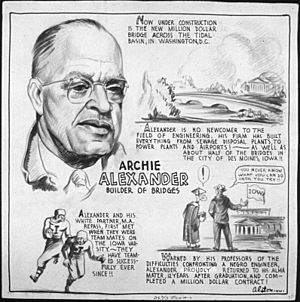 In 1954, Alexander was appointed Governor of the United States Virgin Islands by President Dwight D. Eisenhower. He was the first Republican governor there since the establishment of the civil government. His tenure at the post was short and controversial. In 1955, he was highly criticized for favoring old business partners in contracts for road building on St. Thomas. The United States House of Representatives launched a probe and he subsequently resigned on August 18, 1955, ostensibly for health reasons.

Alexander married Audra A. Lindzy in Denver, Colorado, in 1913. They had one child, Archibald Alphonso Jr., who died as a young child.

Alexander died of a heart attack in 1958 in Des Moines, Iowa.

The Archie Alphonso Alexander Papers are held at the University of Iowa Special Collections & University Archives.

Alexander is included in the Chick-Fil-A College Football Hall of Fame for his three seasons on the University of Iowa varsity football team.

All content from Kiddle encyclopedia articles (including the article images and facts) can be freely used under Attribution-ShareAlike license, unless stated otherwise. Cite this article:
Archie Alexander Facts for Kids. Kiddle Encyclopedia.