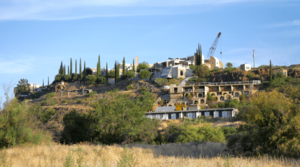 View of Arcosanti from the southeast, showing buildings from Crafts III on the far left to the guestrooms in the right foreground

The cafe's dining area, two stories below the Arcosanti Visitors' Center and Gallery

Arcosanti is a projected experimental town with a molten bronze bell casting business in Yavapai County, central Arizona, 70 mi (110 km) north of Phoenix, United States, at an elevation of 3,732 feet (1,138 m). Its arcology concept was proposed by the Italian-American architect Paolo Soleri (1919–2013). He began construction in 1970, to demonstrate how urban conditions could be improved while minimizing the destructive impact on the Earth. He taught and influenced generations of architects and urban designers who studied and worked with him there to build the proposed "town".

The goal of Arcosanti is to explore the concept of arcology, which combines architecture and ecology. The project has the goals of combining the social interaction and accessibility of an urban environment with sound environmental principles, such as minimal resource use and access to the natural environment. The project has been building an experimental town on 25 acres (10 ha) of a 4,060-acre (1,640 ha) land preserve. 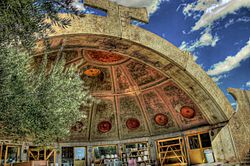 Ground was broken in 1970 to begin construction on the site, and has continued at a varying pace through the present. The most recently completed building was finished in 1989. The population has tended to vary between 50 and 150 people, many of them students and volunteers. Ultimately, the goal has been for Arcosanti to house a population of 5,000 people. Thirteen major structures have been built on the site to date, some several stories tall. One master plan, designed in 2001, envisions a massive complex, called "Arcosanti 5000", that would dwarf the current buildings.

Many features are particular to the design and construction of Arcosanti. For example, tilt-up concrete panels are cast in a bed of silt acquired from the surrounding area, giving the concrete a unique texture and color that helps it blend with the landscape. Many panels were cast with embedded art. Most buildings are oriented southward to capture the sun's light and heat — roof designs admit the maximum amount of sunlight in the winter and a minimal amount during the summer. The structure built to shelter bronze-casting is built in the form of an apse, a quarter-sphere or semi-dome. The layout of all the buildings is intricate and organic, rather than the grid typical of most US cities, with the goals of maximum accessibility to all elements, a combination of increased social interaction and bonds, together with privacy for the residents.

Existing structures at Arcosanti are meant to begin to provide for the complete needs of a community. They include: a five-story visitors' center/cafe/gift shop; a bronze-casting apse; a ceramics apse; two large barrel vaults; a ring of apartment residences and quasi-public spaces around an outdoor amphitheater; a community swimming pool; an office complex, above which is an apartment that was originally Soleri's suite. A two-bedroom "Sky Suite" occupies the highest point in the complex; it as well as a set of rooms below the pool is available for overnight guests. Most of the buildings have accessible roofs. 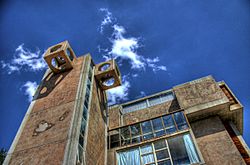 Arcosanti has a Camp area, built by and for the original construction crew. It is used today as housing for people most interested in development of the agricultural department. Camp has a small greenhouse, with easy access to gardens and large agricultural fields that as of March 2017 were not being cultivated. Terraced greenhouses are planned along the slope of the main building site for winter plant and garden space, and to collect heat to distribute through the buildings.

Arcosanti was conceived of and remains primarily an education center, with students from around the world visiting to attend workshops, classes, and to assist with the continuing construction. 40,000 tourists visit yearly. Tourists can take a guided tour of the site or make reservations to stay overnight in guest accommodations.

Since 1970, participants have come to help build Arcosanti by enrolling in workshops. During a standard five-week workshop, they attend lectures about Paolo Soleri and the principles of Arcology design while gaining hands-on learning experience by aiding construction. Although the program attracts many who are interested in art, crafts, architecture and urban planning, it is also pertinent to those interested in philosophy, sociology, science, and agriculture.

1956 – Paolo and Colly Soleri purchased the land in Paradise Valley, Arizona, upon which the Cosanti studios were built. Their first official activities began there in 1959.

1969: Arcosanti – Soleri coined the term "Arcology" to describe his designs for ecologically sound human habitats, as elaborated in The City in the Image of Man, published by MIT Press to accompany a so-titled 1970 exhibition at the Corcoran Gallery in Washington, DC. The book develops the concept of Arcology and its design variations for different settings. Arcosanti, introduced as the last (30th) example of this exercise, was originally planned to house a relatively small population of 1,500 people. The physical construction of Arcosanti began in 1970.

1978: During a festival held at the site, a grass fire ignited in the area being used as a parking lot and over 180 cars were damaged or destroyed. 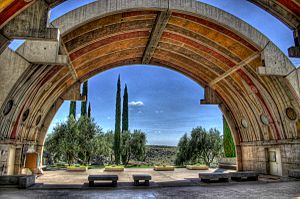 1980: Critical Mass – Ten years into the construction of the first prototype arcology, a developmental adjustment was made to gain momentum for the project. The Critical Mass concept was introduced as an incremental phase to house 10 percent of the projected population of 5,000. A series of small-scale structures, providing various amenities, were designed to support a viable community. This was intended to support the next major step, the completion of Arcosanti.

2001: Arcosanti 5000 – Developed from the Super Critical Mass in "Arcosanti 2000", with the design elements of "Nudging Space Arcology" added, Arcosanti 5000 features seven phases of truncated super-apse structures. It re-establishes the macro nature of this prototype arcology for 5,000 people. This design is in development, awaiting architectural and structural resolutions.

2009: Paolo Soleri's 90th Birthday Celebration and Alumni Reunion – Paolo Soleri celebrated his 90th birthday at Arcosanti, joined by 300 alumni and guests for the occasion. The official schedule started on June 19; this first day was devoted to alumni. Ongoing events included Kundalini yoga, a morning bell-carving workshop, a silent auction, and an exhibition with the newest renderings of Critical Mass. The festivities continued into the night with a bronze pour in the Foundry, followed by a techno party in the Vaults, and performances on a stage in the Ceramics Apse.

The birthday celebration for Soleri resumed on Saturday with attendees partaking in a gargantuan "frugal soup" gathering in the Vaults. Documentary film maker Geoffrey Madeja presented a short video. Tomiaki Tamura followed with a visual presentation of Paolo’s life and work and a pictograph especially choreographed for Paolo. The final performance of the night was hosted by Flam Chen, in a series of acrobatics involving dazzling fire, lights, and extreme heights.

2011: On July 14, 2011, the Cosanti Foundation announced that its founder Soleri had retired as its President and CEO. "There are other things that I want to accomplish," said the 92-year-old Soleri. "I am ready to leave the management of the Foundation and its primary project – the urban laboratory Arcosanti – to the next generation." That generation was to be led by Boston architect Jeff Stein, AIA. Stein’s proposals for Arcosanti began with: a half-dozen new apartment buildings; a canopy for the amphitheater; a renovated commercial bakery; and a storage unit for Paolo Soleri’s collection of architectural models. 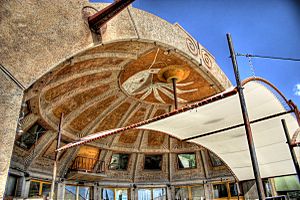 Arcosanti operates under aegis of the Cosanti Foundation, a non-profit 501(c) 3 organization. The Foundation runs workshops to teach Paolo Soleri's ideas. As of 2012, more than 7,000 participants had aided in the construction through participation in five-week workshops. Each workshop includes a Seminar Week, which covers Soleri's background and history, as well as his concepts about arcology design. They hear lectures from different departments at Arcosanti to see how Arcosanti operates, and then spend the following weeks working at the priority project of the site.

Arcosanti is the home of the bell-making enterprise of Cosanti Originals, which sells Soleri's sculptural wind bells to support the greater architectural project.

Over six years in the making, the (2013) feature-length documentary film on the life of Paolo Soleri and the birth of Arcosanti, The Vision Of Paolo Soleri: Prophet In The Desert (2012) features on-camera interviews with journalist Morley Safer, Will Wright, architectural critic Paul Goldberger, Catherine Hardwicke, Will Bruder, Jean-Michel Cousteau, architect Steven Holl, and Eric Lloyd Wright.

All content from Kiddle encyclopedia articles (including the article images and facts) can be freely used under Attribution-ShareAlike license, unless stated otherwise. Cite this article:
Arcosanti Facts for Kids. Kiddle Encyclopedia.